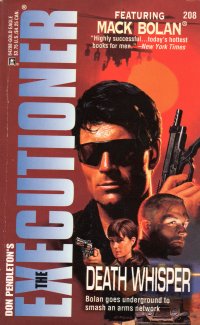 I have been pleased with a couple of the Executioner books I’ve picked up lately. This book and Rescue Run are a cut above, although this one does get a little outlandish at the end.

In this book, Bolan goes to Arizona near the border to investigate a mining company that runs the town and runs off or kills those it cannot control. A lawman known to the man from Justice dies, triggering Bolan’s investigation, and he basically discovers that Soviet deep agents have acquired the mining company and have built a large tunnel into Mexico for smuggling. Bolan has to bust it up, but the mining company has hired an army of ex-Spetsnaz troops to defend the complex.

So Bolan has to singlehandedly, with the help of the dead lawman’s daughter, now the chief of the local police, put a stop to it. Which he does in a set of exploits that get a little ridiculous at the end, and the Able Team and Phoenix Force parachute in to help mop up.

So a cut above, but trending down.

Also, who wrote this, Lee Child?

Larquette snapped out of her daze. She pulled a lever action rifle from a rack off the wall and chambered a round. With a sudden afterthought, she snatched up an extra box of shells and then positioned herself in a crouch between the filing cabinets.

If enough of these books call rifle food shells, I’m going to start doing it, too.