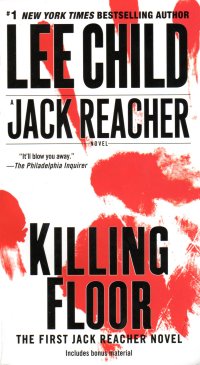 I watched the Tim Cruise film Jack Reacher this month. On Christmas Eve, I had some time to kill before church, so I stopped in at Barnes and Noble and saw a rack of Lee Child books, so I thought I would take a look at the source material. This is the first book, published 22 years ago, by a new English author (from England, not New England). The paperback I have has an introduction wherein the author talks about why he created the Jack Reacher character and his influences–mainly John D. MacDonald.

In this book, the drifting Jack Reacher, riding on a bus as he drifts, on a lark has the bus driver drop him at a highway cloverleaf so that Jack can go to a nearby town where a little-known blues guitarist died seventy or so years ago. Jak walks fourteen miles into town and, as he is having breakfast, he is arrested for a murder at some warehouses near where he was dropped. Which he didn’t commit, by the way.

So he and a local man whose phone number was in the dead man’s shoe are bundled off to a state prison lock-up for the weekend, and several people try to kill Reacher. Or are they trying to kill the local businessman whose number was in the shoe? When they’re released, the business man disappears and although Jack Reacher is nominally cleared and is thinking of drifting along, he discovers the dead man was his…. DUM DUM DUM! estranged brother who worked for the treasury department. So although Jack just wants to roll on, he has to help investigate since the bad guys threaten/kidnap the cute local cop that Reacher has feelings for. Or they cross him one too many times.

The book reachers 524 pages, and it’s told in pretty straight forward first person narration. Unfortunately, it feels padded. A lot of pages are Reacher concluding something at length and, ultimately, incorrectly. Additionally, it reads like a British man trying to write in the American argot. He calls rounds for .22 pistols “shells.” He talks about distance in terms of yards, even if it’s only one yard–or something more Americanly referred to as 3 feet (which I attribute to thinking in terms of meters, a continental measure more equivalent to yards than feet).

He refers to the “gutter” of a car, which I had to look up. It’s not actually a British term for something we call something else, unless the American term is “scuttle.” It’s just esoteric, but I had to look it up.

And, more importantly, he refers to something in Wisconsin as it related to Chicago:

Since Stevie Ray died in his helicopter up near Chicago it seemed like you could count up all the white men under forty in the southern states, divide by three, and that was the number of Stevie Ray Vaughn tribute bands.

As you know, gentle reader, Stevie Ray Vaughn died flying from a concert at Elkhorn, Wisconsin. I remember where I was when I heard the news: Facing the frozen foods in a grocery store the next day. Where I often was when I learned of deaths throughout the 1990s. As I recounted the story to my beautiful wife, I recounted feeling relief it wasn’t Jon Bon Jovi. But I conflated memories: Relief that the headliner (Eric Clapton) was safe and a bit of Denis Leary’s No Cure for Cancer:

We live in a country, where John Lennon takes six bullets in the chest, Yoko Ono was standing right next to him and not one fucking bullet! Explain that to me! Explain that to me, God! Explain it to me, God! I want it! God! Jesus! Now we’ve got twenty-five more years. Yeah, I’m real fucking happy now, God. I’m wearing a huge happy hat, Jesus Christ! I mean Stevie Ray Vaughan is dead, and we can’t get Jon Bon Jovi in a helicopter. Come on, folks. “Get on that helicopter John. Shut the fuck up and get on that helicopter! There’s a hair dresser in there. Yeah, go ahead in there, yeah yeah.”

I listened to that a lot in the cassette deck of my 1986 Nissan Pulsar in the middle 1990s.

So where was I?

Oh, yes. Well, overall, this book was okay. Kind of what you expect out of midlist thrillers of the day, but a little wordy (okay, a lot wordy) with a lot of the words just waste. A little askew at times, especially once you get into your head that the author is British and misfiring on some American argot (perhaps you can excuse it because Reacher was raised abroad).

I don’t know if he satisfies in this book the description that Lee Child gives of him as a hyper-competent protagonist as he spends so much of the book being wrong and letting things happen to him. I mean, perhaps he’s better than the other heroes in the thick thrillers of the time, but I’m pretty sure the Executioner could take him easily.

Or maybe I’m just jealous, since my college thriller novel completed in 1992 featured a 6’4″ 240 pound ex-military misanthrope, and I didn’t get a book deal much less a series and film franchise out of it.