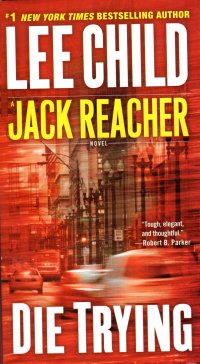 After I finished Killing Floor, I went to Barnes and Noble and plunked down a couple of bucks for the next book in the series. Actually, I almost plunked down a couple of bucks–wait, they’re actually ten bucks for paperbacks now?–for Make Me because the end of The Killing Floor says “Jack Reacher returns in Make Me“, but apparently that was a new book when this paperback edition was published and it was not listing the next in the series.

Well, I clearly did not like the book as much as I “liked” the first one. I mean, it starts out with Jack Reacher accidentally stumbling (literally) into an attempted kidnapping, and he thinks he can take the kidnappers but that innocent people might get caught in the cross-fire. I am pretty sure even I by 1998 had attended a self-defense seminar that said give an attacker your money, but never get in the car. So this would have been a much shorter Brian J. Noggle-as-hero book because I would have been killed by the gunmen in chapter one. But hyper-competent Jack Reacher should have ended it early, but we would not have had a whole 552 page novel to go through to get to the end.

So the actual kidnapping victim is the FBI agent daughter of the Joint Chiefs of Staff, and the kidnappers are a right wing militia (ripped from recent events in 1998, but still a trope twenty years later) who are declaring their own nation in Montana and are using her as a hostage to keep the military from attacking. Or something.

You know, the plot doesn’t make a whole lot of sense, and the pacing is awful. Child has discovered the jump cut third person narration, where we get to see lots of extraneous things going on from different perspectives, and in most cases, they really don’t increase the tension. We get the same events sometimes from three different characters’ perspectives, and then the resolution is simple and underwhelming. And Jack Reacher vacillates between the hyper-competent and pretty passive as events overtake him.

You know, I flagged a lot of things as silly. Like:

“We’re in some sort of a barn,” Reacher said. “With the doors closed.
Holly nodded impatiently.
“I know that,” she said. “I can smell it.”

A dairy barn, I guess, since the beef cattle around here don’t have cow barns.

The guy with the shotgun tore his attenion away from Holly’s breasts. He raised the weapon to his hip. Pointed it in Reacher’s direction. It was an Ithaca 37. Twelve-bore.

He [Jack Reacher] walked fast for twenty minutes. More than a mile.

I should hope more than a mile. The average walking speed of a human is three to four miles an hour. I should hope that Jack Reacher’s walking fast would be better than average. (Although he is carrying a dead body at this point, but still.)

“I don’t have many facilities available,” he [the Chairman of the Joint Chiefs of Staff] said in turn. “It’s the holiday weekend. Exactly seventy-five percent of the U.S. Army is on leave.”

The parade ground was full of people. All standing in neat ranks. Reacher guessed that there were maybe a hundred people there. Men and women. All in uniform. All armed. Their weapons formed a formidible array of firepower. Each person had either a fully automatic rifle or a machine gun sling over their left shoulder.

A fully automatic rifle or a machine gun! Do tell. Even if we’re going to argue about whether some had M2s over their shoulders, we’re already outside the story, ainna? Trying to make the text somehow conform to our experience and think maybe the author was winging it a bit?

He kept close to the road, all the way back to Yorke. Two miles, twenty minutes at a slow, agonizing jog throuh the trees.

Friends, six miles an hour is a comfortable run for me. Not a slow, agonizing jog. Of course, I’m not in the peak of human conditioning, and I know the military expects more of its recruits, but it’s not how I would characterize six miles an hour.

Where the earth had fractured and fallen, the edges had broken up into giant boulders. The scouring of the glaciers had tumbled those boulders south….

Blah blah. Here, have a page or so history of the ice age that created the topography of this particular obstacle. My old fiction professor would talk about nice little moments in short stories, but too many of these nice little moments, and I hearken back to another professor of philosophy who admitted one day that all the amusing stories he told in class were simply because he had to fill the time and couldn’t let us go too early or it would reflect bad upon him (and this was the 3:30 to 5:00 class that finished up my semester of two days of classes, 8:00 to 5:00, so I could work instead on Monday, Wednesday, and Friday, so I was pretty tired of classes by then and didn’t want to listen any more to stories just padding time).

The nearest sentry was still on his feet. Not heading for the shed. Just standing and staring toward the rock Reacher was behind. Raising his rifle. It was an M-16, same as Reacher’s. Long magazine, thirty shells. The guy was standing there, sighting it in on the rock. A brave man, or an idiot. Reacher crouched and waited. The guy fired. His weapon was set on automatic. He loosed off a burst of three.

Sweet Christmas, even I know that the common pew! selector on an M-16 was single, burst of three, and fully automatic. So in saying that the guy had it set to automatic and only fired a burst of three “shells,” well.

Never mind. I flagged a lot in this book and shook my head at a lot of nice little moments that were not so little and a plot that, well, why did they do what they did? Because, BOOK!

If this were an Executioner novel, it would not have been a particularly good one. And it would have been 300 pages shorter. So I’ll stick with them and perhaps Rogue Warrior titles when I fancy something longer.

So maybe I’ll pick up more Lee Child books at book sales for a dollar, but likely not for a while.

I am interested in seeing the other Tom Cruise Jack Reacher movie, though.

And if you ask me, I would say I prefer the metal band. 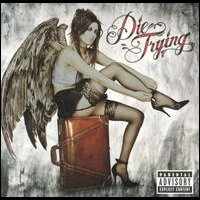 But I would. I actually do own that album. I picked it up at a garage sale sometime.