Okay, perhaps the title oversells it, but on my computers for the last, what, twenty-five years, I’ve carried along and copied over the novels I have started but have not yet finished.

I went looking for a novel I’ve been conceptualizing, doodling on legal pads, and, I thought, plinking on keys in a word processor for a couple of years now, off and on.

It wasn’t in my novels folder. 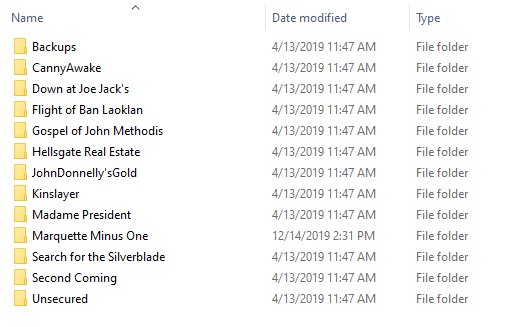 Instead, as I mentioned, a collection of mostly incomplete stunted attempts at novel writing, including:

The date of April last year represents when I copied the directory over to my new PC. 6/7/2001 probably represents a similar move across PCs.

But I could not find The Saviors from Mars Deep, the tentatively titled latest attempt at a novel. As I was working on this post, it occurs to me it might be in the temporary writing folder on my (old) laptop. I hope so. If not, I wasn’t that far into it, so I won’t have lost much.

As I look over the history listed above, it looks as though I got thousands of words into projects before abandoning them because I got bored with them or something else came up, and I abandon novel projects with fewer words invested in them. Either I’m becoming more efficient, or I’ve become more busy. Or lazy.

So will I get to finishing these? Perhaps Second Coming since I have at least an audience of one hoping for it.

And perhaps I will find the existing tappings at The Saviors from Mars Deep and get a couple thousand words into it before abandoning it or several tens of thousands of words before publishing it.

1 thought on “The Folder of Broken Dreams”