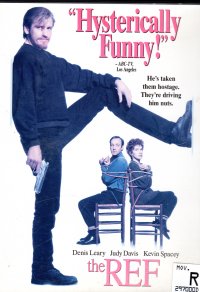 I have made a gag in the past, probably on Facebook, that now that we have settled that Die Hard and Lethal Weapon are Christmas movies, we have to move on to proving that The Ref is a Christmas movie. After all, it has family coming over for the holiday meal and a story about redemption. Well, maybe not redemption.

Within it, Denis Leary, fresh from his stand-up comedy special success but before the award-winning program Rescue Me, stars as a burglar whose job on Christmas Eve is thwarted, and the local police bottle the town up to try to catch him. He kidnaps a couple (Kevin Spacey and Judy Davis) on their way home from marriage therapy and keeps them prisoner in their home as he tries to figure out an escape. Complications arise as their malcreant son is on his way home from military school and the man’s mother and other relations are coming for dinner. The burglar deals with the bickering and family drama as the film takes on, as so many do, suburban decay.

So amusing at times, but not a high comedy–better than Hot Tub Time Machine 2 but not as good as the National Lampoon movies I’ve seen recently (see this and this).

But it’s still worth bringing forth as a Christmas movie and arguing on the Internet about it.