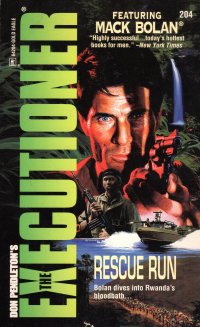 All right, then, let’s skip ahead. The last Executioner novel I read was Lethal Agent from 1994 when I was just embarking on a romance with the girl whom everyone thought I would marry. This book came out two years later, and I was on the verge of ending that relationship. Well, maybe not that close: I don’t have my resume handy, but at the end of 1995, I was done working at the industry magazine where I’d had a temporary Assistant Editor position for a special project, and I’d not shone enough to extend it, so I was only working at Sappington Farmers Market. I was at loose ends of a sort. But in a couple of months, I’d land my job as a printer that would put my workplace halfway to Columbia, and in about a year I would meet my beautiful wife. So that late mid nineties period is a bit of a blur of changing jobs and circumstances. Which is more than you hoped to get from a book report, gentle reader, but these subscription titles are also a prompt for me to reflect where I was when these books were fresh on the grocery store racks.

At any rate, this book takes place in Rwanda right after/during the unpleasantness of the middle 1990s. A visiting theatre/variety act troop including an aging woman star (she’s like old, man: she’s like forty), an older (sixties) star of westerns who dresses more like Roy Rogers than John Wayne, a young action star who thinks he’s God’s gift to women, and a makeup artist, escape renewed fighting while they’re performing–a native promoter leads them to safety and hides them in one of his hideouts. Bolan gets sent in to find them and rescue them because…. Well, I forget; essentially, it’s because this is an Executioner novel.

So the book goes between Bolan and his allies looking for the theater troupe and the theatre troupe on the run, a nice blend. A subplot involves the action hero behaving dangerously boorishly and a budding romance between the Western star and the actress.

One of the hard men who helps Bolan is nicknamed Tater, which is kind of funny in 2021, where a CNN host has been nicknamed Tater by elements of the conservative blogosphere, and picturing the CNN host as an action hero does not compute.

So worthier of a read than others in the series, like the next one which I’ll get around to reporting on in the next couple of weeks–movies, books, and audio courses are piling up, and I’m not spending a lot of time at my desk this summer.