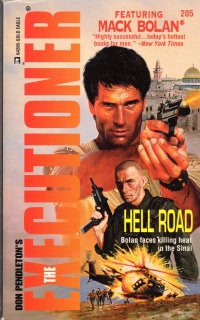 We don’t skip but a month ahead in time between publication (in December 1995) Rescue Run and this book (January 1996), so no great leap forward in my life. Of course, I failed to mention that my father passed away in the last gap and we moved from the house down the gravel road, to whence I returned after college, to the rundown suburb in south county where my mother grew up. In two months, I will get the printing job which was my last non-IT job, and sometime later this year, I will break up with the young lady whom I’d dated for, what, two years? At any rate, that’s personal trivia and not a discussion of the book.

I brought this book on our vacation in De Soto as one of the two little fiction books to read among the Important Books I brought to compel myself to read. So, of course, I read it and the other fiction book before I completed The Pessimist’s Guide to History.

However, this is not one of the better entries in the series.

The plot: The Israelis have captured a major Iraqi terroist (ca 1996) and will, reluctantly, turn him over to the United States for trial. However, he’s broken out of captivity with the help of an Israeli turncoat and an agreement with an American mercenary leader to lead him back to Iraq. The American mercenary also has picked up a couple of nuclear missiles from Russia (nee: The Soviet Union) that he hopes to sell with the freed Iraqi to The Iraqi Madman (so-called, but not named until later in the book, which made me wonder).

So. Yeah. That’s a complicated plot as they’ve started to get. How’s it executed?

Bolan shoots a guy in the leg with a .44 Magnum so he (the shootee) will be available for questioning. And he shoots a guy with the same gun who runs off, relatively unhurt. Also, the book calls a C-130 airplane a “gun ship.” So one gets the sense that the subscription author might not know what he’s talking about.

I guess one could say that the book was interesting in the abstract, but not so much in the… execution.

I cannot believe that I haven’t said that so far in the series, but you might expect to see that again in the future given that I have a dozen later titles in the Executioner series and a several dozen in other previous, current, and later related series to go.