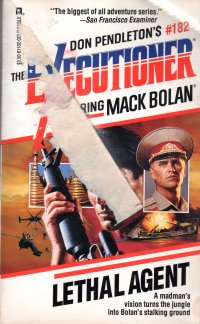 I said I was done with movie tie-in and television tie-in books for the nonce, so I dived right into an Executioner novel.

This book starts in media res with Bolan in Burma, rescuing Brognola from Russians who are holding him. To make a couple of paragraphs of treatment into a novel, a former Russian army officer whose brother died in Afghanistan has continued work on nerve agents in the Burmese jungle with the protection of a local warlord. He hopes to make enough nerve gas to use in Afghanistan to get revenge and to embarrass the Russians who have left Afghanistan behind. Bolan goes into the jungle to stop it before the Russian can further test the nerve agents on innocent villagers and finds both Russian and US teams on the Russian’s trail as well with their own agenda.

So pew pew pew, meetings with friendly village militia, Bolan running around with a bullet hole, and dramatic final confrontation where the Russian says he and Bolan are a lot alike (join me, Luke!), and finis.

So it’s a Bolan in the jungle book, not one built with the layers of a thriller like some of the other books in the series. Which is nice that some of these later (but not latest) books move between the two story styles to keep things fresh. After all, I have twelve eleven Executioner novels and 34 related titles left. It turns out I had a copy of Evil Kingdom, the middle book in the Medellin Trilogy, filed not in the numerical order with after all and did not have to order it off of the Internet at an exorbitant price. It was not in numerical order because it was a Super Bolan title, so it was shelved a little to the right of the numbered entries in the series. On the one hand, dang; on the other hand, one less book in the series I have to read.

Strangely enough, I don’t see Executioner books much in the wild at book sales these days. Mainly because the Clever book sale ended as the Clever Library folded into the Christian County Library system and because I only intermittently get to the Friends of the Christian County Library book sale in Nixa or Ozark (when it’s regularly held, which is not in a year and a half). I don’t tend to visit the cheap paperbacks at the Friends of the Springfield-Greene County library sale. Which prevents me from the dilemma of whether I want to get more of these books–after all, I might be but a year or four out from finishing the set I have. Do I want to extend that? I don’t think so, enjoy them as I might. But time will tell when the temptation is there.