Back in about 1990, when I learned that Milli Vanilli was not really Rob and Fab (after having seen them at Summerfest where they had problems playing the vocal tracks and were delayed several times–yes, with Dave), I thought, huh, someone made that music–they should release a CD with the real vocalists.

Now, in an article about the death of one of the real vocalists, I see they did:

Farian attempted to repackage the group as The Real Milli Vanilli, to feature the actual singers on Milli Vanilli recordings, namely Davis and Brad Howell, 77. Their album “The Moment of Truth” made rounds in Europe, Asia and South America, but the band never again reached the fame launched by Pilatus, who died in 1998 at 33, and Morvan, 55. 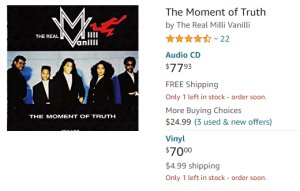 Given that the record was bigger in Europe than stateside, I guess I’ll have to wait until I go to a European garage sale to pick it up.