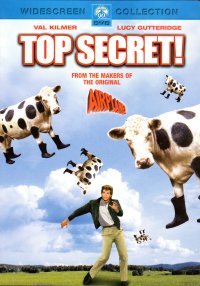 We watched Val Kilmer in two movies over spring break (Real Genius and Top Gun). I read something about his new documentary at that time. I have since watched Tombstone, and when I read another New York Post article on the documentary, I decided to watch this movie with the boys. After all, it was on Showtime when I was in the trailer park, so I watched it over and over again while I was about their age.

Val Kilmer plays Nick Rivers, a surf rock (known for his hit “Skeet Surfin'”) who gets invited to a cultural festival behind the Iron Curtain and gets involved with the resistance who wants to smuggle a scientist out of the country before he can be forced to help the communists attack the NATO submarine fleet.

The film had more sexual content than others I’ve watched with the boys–some of it went over their heads, although I would have gotten it at that time, but I was a product of public schools for all of my education and I had a copy of the American Heritage Dictionary to look up all the things the other public school kids called me. But the film was also more accessible to them than, say, Airplane! or Hot Shots!. I dunno, maybe it’s because they saw Von Ryan’s Express last year, so they get the behind totalitarian lines thing.

At any rate, I watched this film a year or so back when I got it, so it’s definitely in the class of films I’ll watch over and over again. Just not as often as when I was stuck in a 12′ by 60′ trailer in Murphy, Missouri, with nothing but Showtime to pass the time.