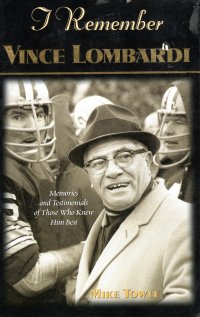 I got this book at the same time that I bought Life After Favre, so I read it soon after the latter book as a palate cleanser.

This book is structured a little like Louder than Hell: The Definitive Oral History of Heavy Metal. The chapters represent different eras of Lombardi’s coaching career, from high school to West Point to the New York Giants and then, finally, as head coach of the Green Bay Packers (and the Washington Redskins, they tell me, but it was a very brief visit before he passed away). Within each chapter, we’ve got quotations from different people broken into blocks of a couple paragraphs preceded by their names and relationships with Lombardi. So it’s like an oral history.

You know what? I read books about Lombardi, and I’m fascinated. I mean, I read Run to Daylight, and I read Instant Replay (twice) where Lombardi appears, but this book reveals some of him that I’d have to go to a biography to get otherwise.

Like when he was a high school coach, he was also a teacher, and that he taught physics and chemistry. He went to Mass every day. And he knew Latin and liked to play Latin conjugation games with old school friends. Incredible. Here, I read an English literary novel and maybe a classic or two every year and think I’m something special. Sadly, in this day, maybe I am. But perhaps it would be better were I a dullard.

I flagged just a couple bits of trivia for noting:

Even Then
A player who started with Lombardi in the 1950s says:

As the defensive signal caller, that meant I would get on the headphones with him when I came to the sideline, and he would tell me what he thought we ought to call and why and what changes we ought to make and other things.

This was the middle of the 20th century. We think that the technology is fairly new, with the green dot headsets. But they did certain things even then. One has to wonder if the constant chatter in the helmet has made things better or worse. And whether putting the radios into other players would make them feel like video game characters instead of men (who are playing a game, but still, they’re the ones playing the game.

A sports columnist wrote about Lombardi going to coach the Redskins:

“It is true that our hero has treated us rather shabbily at the end. Vince Lombardi has gone off, without asking us about it, and made himself a deal in a foreign land to the east. He has cast us aside, rather roughly at that. It is probably true that our former idol has been crafty, calculating, even a little deceitful with us.”

Well, as you know, gentle reader, Aaron Rogers is playing the Brett Favre game this summer, perhaps for the first time, perhaps for the only time. Even Vince Lombardi left Green Bay, but he’s more fondly remembered than Brett Favre and probably Aaron Rogers will be because he didn’t drag it out. He just left. Of course, he died shortly thereafter with only some success in Washington. Who knows how it would have been if he’d lived longer and had beaten Green Bay a couple of times. Probably, though, the clean break would have been good enough.

At any rate, a pleasant read if you’re a Packers fan or if you like excellence.