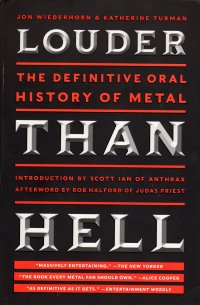 My beautiful wife gave me this book for Valentine’s Day. I started it in mid-March, using it as my “carry book” when I went to the podiatrist amidst The Pandemic even though this book chonks in at 700+ pages. I mean, I didn’t carry it a lot, and I certainly did not get the chance to sit on a bench in church during the Sunday school hour to read it.

Basically, the book is two music journalists presenting the evolution of some metal through the artist’s own words. It groups bands into genres like original metal, British new wave metal, thrash, nu metal, death metal, and so on, and then lets the band members talk about being in the band and so on. The timelines overlap, so we get a little re-starting.

It’s interesting that I recognize the bands up to the early 1990s, and then I have a gap until maybe 2010 or so except for the bands that started / got recognition in the very late 1990s or the bands that were around throughout. So I’m more familiar with the work of Judas Priest, Van Halen, and Testament and then suddenly Disturbed, but I don’t know much about Korn or Slipknot. Also, I’m light on the European bands.

Basically, the cycle is we started a band when we were teenagers, toured a bit, got a record deal, did a lot of drugs and had a lot of debaucherous sex varied a little. The crossover (punk and metal) bands swapped out acts of violence and fighting for the sex, and the black metal bands swapped out killing each other, killing themselves, and burning Norwegian churches (generally not in that order) in for the sex and fighting. So I found it a bit repetitive in the middle sections (nu metal, death metal, black metal) where I didn’t really know the bands.

But it did improve my sense of my own metal cred. I once saw Biohazard in Milwaukee, the week of my college graduation, in a small hall, and lots of bands (or at least the authors of this book) indicate Biohazard was very inspirational. And Static-X was big influence in the industrial movement, and I got a couple Static-X CDs a couple of years ago at a Lutheran rummage sale. So I am at least as hard core as your regular Lutheran.

I flagged a couple of bits in the book: The first is one of the Black Metal guys saying:

There have been times we felt that the whole scene was heading the wrong way, like ’97, ’98, ’99. The scene was permeated by this goth influence, and black metal was suddenly all about synthesizers and these large, pompous orchestrations and femal vocals and harmonies and melody, and everything was so soft and so gothic and so romantic.

Frost, the drummer for Satyricon, is here poo-pooing the rise of symphonic metal, one of the biggest subgenres going today and possibly my favorite, although it’s hard to draw a hard line between metalcore with female melodic vocalists and true symphonic metal.

The second thing I flagged was this unfortunate admission of my cred:

We had this bootleg videotape that we had named “Sex, Death and Mayhem”. It had all this crazy animation, snuff shit, and real death. We decided to splice together an hour of footage for a holiday show, and the footage culminated with the Bud Dwyer suicide. [Dwyer was the former treasured of Pennsylvania who, in 1987, after being accused of accepting a bribe, held a press conference in which he removed a .357 Magnum from an envelope, inserted the loaded revolver in his mouth, and pulled the trigger.]

Ew, you know, I saw that video in 1994 when I was staying with Dr. Comic Book (my friend from college who got a doctorate in rhetoric and now teaches college courses on comic books who, after reconnecting with me on Facebook this century, unfriended me because of our differing political beliefs). We were going to see The Mask and walked over to some the apartment of some of his friends. As Dr. CB also came from a rough neighborhood, his friends are a little sketchy, and they had this death on videocassette, and they watched it over and over again before we went to the movie.

Eesh, I have a lot of cred for a kid who got picked on by metal fans a lot throughout high school.

At any rate, at 746 pages including index, the book is long, but probably not as comprehensive as it would suggest in its subtitle–especially as new subgenres have arisen since then, and several of the interviewees have passed away. Some bands around in the very end of the period this book covers have become very big indeed (Shinedown, Five Finger Death Punch, and so on) aren’t even mentioned in passing.

Worth a glance, I suppose, but probably in small doses, maybe a chapter here and there to keep the almost monomythic narrative fresh. Or if your beautiful spouse gives it to you.