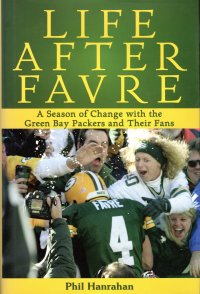 I bought this book in 2019. Maybe I didn’t know when the time would be right to read it, but given the nonsense in this off season, wherein people are claiming that Aaron Rodgers doesn’t want to play for the Green Bay Packers any more, I knew the time was now. As to the truth of the Rodgers situation, I can believe it. In spite of his being good at Jeopardy! and an entertaining host of it, I can find it easy to believe he wants to leave–I saw the look in his eyes last year, when the conference championship was at Lambeau Field. He did not want to be out there playing football in the cold. So I can find it easy to believe that he might want to play somewhere warmer. But if he does, a pox on him.

But that’s not about this book. This book. Well, it’s an interesting book, all right, a bit interesting in its conception and execution. The author, living in LA at the time but a native Wisconsinite, decides he wants to write a book about the year after Favre left. So he moves to Green Bay for the season, but also attends several games in different places and travels to Kansas to watch a game in Jordy Nelson’s parents’ bar, travels to Kiln, Mississippi, the home of Brett Favre, and travels all over while renting a place in an extended stay in Green Bay. He goes around, talks to other fans, and…. Well, that’s the book. Not a whole lot of insight into the Favre thing other than recounting a bit of it which had kinda fallen out of my mind, and he brings up the names of some nearly forgotten Packers players for some pleasant memories. The book plays up the young Aaron Rodgers as eager to please, to lead, and to make a good impression with his teammates–an impression that, over time, looks a bit disingenuous.

Of course, as I’m reading this, I’m wondering who’s paying for it. I mean, fronting the money for that sort of thing must have been fairly expensive, and this is not a big name author or the member of some media organization. This looks to be about his only book. In the acknowledgements, he thanks his parents for his support, and I thought, a-ha! When I read the back flap of the dust jacket after I finished the book (I removed it while reading the book–funny, it’s there to protect the book, but nowadays we, and by we, I mean I, protect the protector more than the protected), I discovered that he taught writing at Marquette. He must have been after me, I told my beautiful wife, but actually we overlapped–but he must have been an adjunct or associate professor, teaching the 001 classes or something, since I did not take his classes, and I was not only in the Writing Intensive English program, but I had so many English credits that my graduation was in jeopardy (is that the second time that word has appeared in this book report? Is double jeopardy even allowed in these things?).

At any rate, so how did the Favre thing compare to the Rodgers thing? Kinda close, actually: Rumors and hints in the national media, a primadonna star quarterback who believes unfallibly that he’s in the right and that he’s not respected, and the general manager should be sacked. Worry that nobody would want to play for Green Bay without the recently departed star quarterback. The Packers did really get lucky with two really good quarterbacks in a row leading to 25 years of really good football–I’m a fair weather fan who really only got into it about twenty years ago, so I don’t remember the lean years. Perhaps if the Packers revert to the mean, I will end up only kind of following them and catching a game here or there kind of like I follow the St. Louis Blues these days. Eh, we will see.

So I did flag a couple of things for comment.

The good Lord gave you a body that can stand most anything. It’s your mind you have to convince.

I love Lombardi quotes, and I might have to read that other book I got two years ago, I Remember Vince Lombardi. Not only would it continue with the theme, but it would then make it six for seven books from that trip read. The remaining book is one of Julian Lynn’s books, Four Gates to Health: Eastern Ideas and Techniques for Vital Living which I will probably not read real soon.

“What if I told you that…I don’t know my own strength?” he says. “I’ll make one of those hits and I’m like, ‘Did I do that? Was that me?’ I have to be honest with you. The guy you see on the field is not the guy you see off the field. Well, I mean everybody has teir ego, from guys in the medical profession to Mr. Trump–everybody has that.”

It’s amazing how embedded in the culture Trump was.

We Know That Feeling At Nogglestead

Beat the Bears, and, frankly, it would be a better Christmas holiday for the people here in Mabel Murphy’s tonight.

To be honest, I think it’s a successful season if the Packers go 2-14 or 2-15 or whatever it’s going to be as long as they beat Chicago twice.

At any rate, well written, but the topic and the execution are a bit off. The timeline wanders back and forth a bit and it seems more of a desire to write a book–and to have the experiences in the book in order to write the book–that propels it all along. So a bit underwhelming.