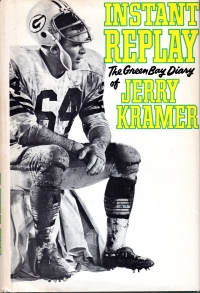 It’s been eleven years since I read this book. I remember I took it with me over a long weekend that my beautiful bride and I took to Kansas City. Funny what happens in eleven years. Now I remember well the name of the book store in Springfield since I pass it several times a week. But I probably only go into it as frequently as I did back when it was a pilgrimage when we went to Springfield.

At any rate, this report is going to be a lot like the first one: Jerry Kramer was the left guard for the Packers in the 1960s, and the year captured in this book is the run up to the third consecutive NFL championship and second Super Bowl (although the coach, Vince Lombardi, is more concerned with the former than the latter). Kramer talks about his aging in the game, about the mechanics, techniques, and preparations involved in the game, and his outside interests and investments. It’s a pretty loose and readable style and it carries you along even if you don’t know football or the historical nature of the season. Actually, this report is going to be a lot shorter than the other because I’m just going to summarize the book and direct you to that earlier report for more depth.

I picked up this copy of the book because it had the dust jacket, unlike my other copy, and I got it with a couple of other Kramer books. So expect a couple other reviews of his works during football season interspersed among the picture books.