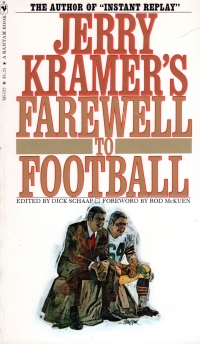 Jerry Kramer wrote this book a little more than a year after Instant Replay. The year after that book, the first year after Lombardi (who retires from coaching at the end of Instant Replay), the Packers cratered and lost more games than they won. Kramer’s Instant Replay became a best seller and he was quite in demand as a speaker and television guest. So he decided to give up playing football and to be a businessman since he has quite a few irons in the fire already.

So this book is a bit musing along those lines and a bit more detailed biography than Instant Replay. It doesn’t hold together quite as well as the first book as it had a unifying theme, and this one does not as much. It also might have been rushed out to capitalize on the success of Instant Replay.

At any rate, as I was reading it, I couldn’t help but wonder if Kramer’s optimism in his post-football life and business dealings were a bit optimistic. I wondered whether a lot of deals and opportunities came his way simply because he was a champion professional football player. I was pleased to see toward the end of the book that Kramer himself acknowledged this doubt.

So it’s not as good as Instant Replay, but it’s a pretty quick and easy read.

The books might also explain why Jerry Kramer is not in the football Hall of Fame: both of these books have a perspective about playing football that the industry might not want expressed. Kramer sees football as a job that he knows will end someday and, honestly, might not be the job he focused on in his last years in football. That might have stung some of the league officialdom at the time who might have wanted more focus on football, if not exclusive focus on football. Oh, how they might wish nowadays that the outside life of football players merely included business deals and hunting instead of lawbreaking.