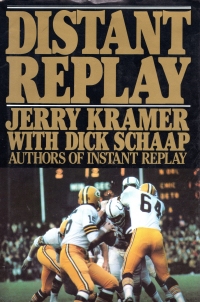 This book comes fifteen years after A Farewell to Football and details the first reunion of the Super Bowl I Packers in Green Bay. Kramer discusses what each player at the reunion has done since his football days ended. It’s a wide variety of stories: Max McGee founded the ChiChi’s restaurant chain and then cashed out for $18 million. A couple players went onto other teams, but never had anything like the Packers even if they won Super Bowls with other teams (and many did; the league was smaller then). Some have beaten cancer. Many are on their second wives (including Kramer), which is strange, because those of us latchkey kids from the 1980s thought our parents invented divorce.

The tone of the book kind of makes you feel a little sympathy for Kramer, though. His optimism from his previous book seems a little forced in this book, and he does seem a little envious of those who have done better than he did since he mentions their net worth a lot. He’s not unconscious of the scorekeeping though, and he’s not done bad for himself, but he’s a six-hundred-acre guy (the size of his ranch) and knows although some people are sixty-acre-guys, a couple are six-hundred-thousand acre guys. And it rankles a bit.

So it’s a bit of a melancholy read being a retrospective of sorts and because it comes right on the heels of the previous book. That fifteen years vanishes instantly. And fifteen years after they stopped playing, all of these guys are a little older than I am and they’re far ahead of me in Krameresque scorekeeping. But in 1985, none of them had blogs with ten years of archives generating dozens of Google search hits a day and twenty cents annually in ad revenue. WHO’S WINNING THE 21st CENTURY? ME!