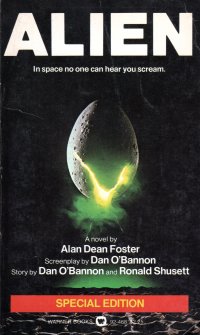 Wait a minute, Brian J., didn’t you already write a book report about this book this year? you might ask. Gentle reader, I understand why you might think so. But the movie novelization by Alan Dean Foster that I read earlier this year was Alien Nation. They would be shelved together in the used book store assuming that Alien Nation came before Aliens, which Foster also novelizinated. Of course, they might not even be in the used book store at the same time. Certainly my copies will not be until perhaps after my death.

Okay, so this is the novelization of Alien. I have not actually seen the film even though I have it and, I believe, the first two sequels on videocassette. I thought it would be too spooky–as a kid, I shied away from spooky movies, even spooky science fiction movies from the early days when I didn’t want to go see John Carpenter’s The Thing with my babysitters when I was ten years old. So I have probably backburnered this film with that same kind of dread. Although I did see Aliens in the theatre when I was fourteen years old. But probably not since. Now that I’ve read the book, I am a little more prepared for the movies, so perhaps I will give them ago. Albeit without my boys, who are probably not ready for it yet even though they might think they are.

So, the plot: Seven crew members on a faster-than-light tugboat are awakened from their cryogenic sleep to investigate a ‘distress call’ on a planet in a sector they’re passing through. They land, and as they explore a derelict alien craft, one of them gets attacked by an alien that attaches itself to his face. They bring him aboard, against all procedure, and eventually a different alien bursts from his chest, and the crew tries to hunt it down but finds itself outmatched, especially as someone on the crew seems to be helping the alien. I mean, you know the basics, right?

A third of the book is in setup before the attack on the derelict occurs, and about another third elapses before the Xenomorph is loose on the ship, so we get a rather brief run through of fighting the alien. I have to wonder if the movie itself is paced this way, or if this is another instance (like Alien Nation) where a lot of time is spent on world building in the beginning that doesn’t appear in the movie. This article explains some of the differences between the original screenplay and what was shot and also mentions a couple of things left on the cutting room floor that appear in the book.

So I’ll be set up for jump scares that never come, maybe.

But I liked the book all right; it’s got a We Find A Mystery Of Another Civilization/Race thing that I like, and I like the detail Foster builds into the world of being a working-class space farer. And I like Alan Dean Foster. So you know if I find other Alan Dean Foster books in the wild, I’ll grab them, but they’ll have to be at smaller book sales or garage sales unless they’re misfiled in the Martial Arts section at ABC Books or the Ozarks section at the Friends of the Springfield-Greene County Library book sale since I don’t go out seeking science fiction books. But they manage to find me.

At any rate, I only flagged one thing in the book, and it was because of a coincidence:

Unexpectedly, a realignment of priorities in her [Ripley’s] querying jogged something within the ship’s Brobdingnabian store of information.

I came across that sentence immediately after my beautiful wife played some Brobdingnabian Bards filk music while we were playing cards, and I explained the origin of the term (Gulliver’s Travels). It’s not quite the Jeopardy! nexus, but still.

So, now, the question: Do I read another movie novelization or television series tie-in, or do I delve into the stack of books I bought last weekend. I am keeping you in suspense, gentle reader, because I have not decided just yet.