As you know, gentle reader, I have spent some time this spring reading movie and television tie-in paperbacks (and a hardback). Which has led me to watch a couple of movies last week. 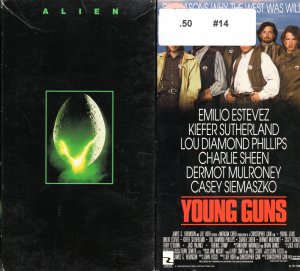 I watched Alien because I read the book, and I watched Young Guns because Heroes and Outlaws of the Old West featured a lot of participants in the Lincoln County War in New Mexico, which Young Guns dramatizes.

So, what did I think?

I had not seen Alien before. As I noted in the book report, I had read that some scenes in the book were missing. Which was true. The ship seemed bigger in the film than in the book, which made for creepy empty rooms for filming, but I have to wonder about how much metal and stuff would really go into the Nostromo, a tug pulling a large industrial complex. Or does the movie take place on the whole refinery? Perhaps I am asking too many questions. But these slasher movies in space are not my bag, so although I will keep my eye out for Aliens since I somehow missed picking it up when I bought the other three of the first four entries in this series, it might well take me years to get to them.

I had seen Young Guns before, but much closer to its release than today (thirty-three years later, old man). It’s rated R, but it’s an eighties R for violence and swearing, but the violence is not especially gory. Although it’s probably not indicative of how one would fare against gunshot wounds, as some people get shot a bunch and die cinematically whilst others, like Billy the Kid, get shot three times and ride away without any distress. I do like the way that Emilio Estevez () played Billy the Kid as a manipulative psychopath, just enough so that you think maybe he’s not psycho, but, yeah, he’s probably psycho. The film is not historically accurate, but it’s probably better than any Western made in the 21st century.