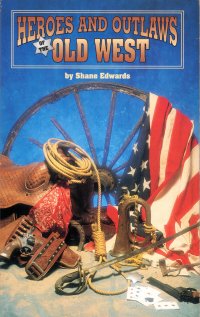 I asked yesterday whether you thought I would delve into a book that I bought over the weekend or if I would read another movie tie-in book next. Hah! Gentle reader, as you well know, this is an example of a false dilemma. As it turns out, I picked up a thin children’s (I dare say it’s younger than Young Adult, but who knows in the 21st century?) book about, well, the title says it all, I suppose. I bought this book in 2012 along with Hud and a couple of M*A*S*H books, which might make this movie/television tie-in adjacent. That, and the other thing that we will get to.

The book is 128 pages of quick read–it took me about two hours start to finish. It lists, alphabetically, a variety of lawmen or outlaws from the frontier days (which means the latter half of the nineteenth century and maybe the first decade of the 20th–it’s amazing how not long ago this was). It’s got some of the usual suspects–Jesse James, Black Bart, Butch Cassidy and the Sunset Kid–and it pretty much has everyone from the Lincoln County War, including Billy the Kid amd Charlie Bowdre, so one wonders if the author was a fan of the film Young Guns which came out in 1988 (and the sequel in 1990).

The information within is perhaps dubious–it espouses the view that Butch Cassidy survived the shoot-out in Bolivia among other things. And it has something of a message, as all the outlaws die young by violence, and all the lawmen live to an old age after they retire in their 40s.

So a good idea book if you’re looking for things to write about in the old west, but probably not a source you’d want to cite. And, as I mentioned, a quick read even if it took me nine years to get to it.

1 thought on “Book Report: Heroes and Outlaws of the Old West by Shane Edwards (1993)”