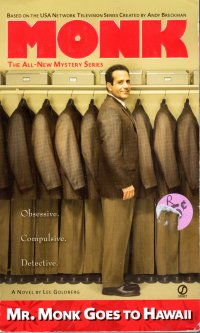 All right, all right, all right, I said I was going to finish David Copperfield before I picked this book up, but I did a couple of chapters of Dickens and wanted another break. So I picked this book up a week later. This one, recall, gentle reader, I bought at the Friends of the Christian County Book Sale in 2017; given that this particular sale generally runs concurrently with the Friends of the Springfield-Greene County Library Book Sale, I checked to see if it, too, was running this week. Oh, but no: it was an in-library event the first weekend of the month. Which I would have known if I only subscribed to the Christian County Headliner. And, I suppose, read it in a timely fashion (I often fall a week or two behind, so I generally only later discover events I would have wanted to attend).

But enough about me: This book has Natalee, Mr. Monk’s assistant, dropping a bomb on him: her best friend is getting married, so she has an all-expense trip paid for to a resort in Hawaii for a week, and she waits until the day before to tell him. She expects to have a week away from him, but he, with the help of a prescription from his psychiatrist, flies on a plane (with all of his inhibitions and habits gone) to join her.

Mr. Monk is the man to speak up at the wedding, as he noticed things that indicate that the groom is a liar and potential bigamist; after that, an older (sixties!) woman with a trophy husband is murdered; it turns out that he has married older women and inherited them before, but in the past, they’ve died of natural causes (or have they?). She was bashed in the head in her bungalow after reporting hearing voices. Meanwhile, a spiritualist next door filming his television show says he has messages from Monk’s dead wife and Natalee’s dead husband, and Monk wants to prove him a fraud.

Again, a good book, and I am going to look for Lee Goldberg work next Saturday at the book sale. Which is me going out of my way to the fiction tables; most of the time, I only hit the records, audio courses, art books, old books, and local interest sections. But I am planning to not take my boys, so I’ll have a little more time to wander.

At any rate, flags and stuff below the fold.

I Have News From The Future

Television was my entire frame of reference for Hawaii anyway. I couldn’t look at the Wikiki shoreline without thinking of that shot from Hawaii Five-O main titles, the camera zooming up from the water to the rooftop of a hotel tower to find Jack Lord standing there, grim faced and stoic in his blue suit.

I remember it, too; as I might have mentioned somewhere, on the weekend nights when we had friends sleep over, it was M*A*S*H at 10:30, Hawaii Five-O at 11:00, and kung fu theatre at midnight, after which it was the national anthem and then static. (How old am I?)

At any rate, four years after this book, the series was rebooted with recently unemployed cast members of Lost.

I Thought Encyclopedia Brown Had It Solved on Page 41

“She was complaining about how hot it was in L.A.,” Brian said, glancing at us in the rearview mirror. “You should try spending July down under. It’s blistering.”

C’mon, man, it’s winter in July in Australia. Everyone knows that! THAT’S THE KILLER. And he’s named Brian, which means he’s pretty shady to start with!

As it turns out, he was only a minor character at the outset of the book.

Haole is an ethnic slur for white people. But it’s not a magic word. It appears throughout the book just like it’s a bit of regional dialog.

I Learned The Origin Of A Word

The menu was a chalkboard mounted on the wall beside an open doorway into the kitchen, where an old woman in a mu’umu’u and an apron, her gray hair tied back into a bun, supervised three other similarly dressed, but younger, omen at the grill.

I had seen muumuu in print before; mostly in 40s detective fiction, I think. But it’s from the Hawaiian.

This Is Not Actually The Origin Of The Term

“At least now I know where the term ‘willy-nilly’ came from,” Monk said. “It’s Hawaiian for ‘chaos.'”

Actually, it’s not. But I looked it up to expand my word power.

I have often used brah as a noun of direct address. I’ll have to work this into my posts and social media feeds from now on. Although this is my only real social media outlet but for LinkedIn for the nonce.

The woman pulled out of her spot and, using skills I learned from watching The Rockford Files reruns, I let a couple of cars slip in between us and her as she headed down Poipu Road.

I was going to say that this was an anachronism; however, I guess the narrator would have been in her thirties, maybe, when this book appeared fifteen years ago, which means she might have seen the program in syndication when she was young. The books are so (relatively) contemporary that I don’t remember it’s fifteen years old.

I Have News From The Future

“While we were following her, I noticed she’d covered the driver’s seat with a beach towel to keep herself from getting burned on the hot upholstery. There was a big drawing of Chief Wahoo facing us the whole time.”
“Who is Chief Yahoo?”
“The logo of the Cleveland Indians baseball team.”

Speaking of recent anachronisms. Or maybe we’re not allowed to refer a drawing of an Indian any more.

“…Whoever wanted Trudy dead had six fingers on his right hand.”

Monk’s wife was killed by a car bomb triggered by a man with six fingers. It’s a silly little nod to The Princess Bride for those of us in the know.

Our last wedding anniversary before Mitch was sent overseas, we dropped Julie with my parents in Monterey and spent a wonderful night in a nineteenth floor room at the Belmont.


* * * *
We didn’t even een sleep. We held each other close and listened to the music of the street: the clanking of cable car bells, the raplike ranting of a sidewalk preacher, the wail of distant police sirens, someone playing a harmonica, the hnking of cars trying to inch up Powell Street, the drums and clatter of Hare Krishnas marching down Geary.

It doesn’t seem likely that you’re going to hear the individual people or musical instruments nineteen floors up.

At any rate, I liked it and am kind of sorry I don’t have more in the series to look forward to. Maybe come Saturday….