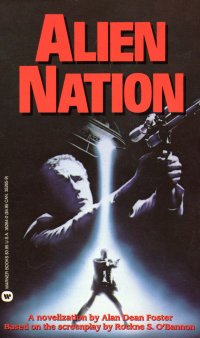 In rummaging through my books last month to find a book by a native author, I went through the collpsed bookshelves and percolated a couple of movie novelization tie-ins to the top. So, gentle reader, you might look forward to reading book reports on a few of them here in the near future.

I told my boys about these movie books and how, before the home video revolution in the 1980s, if you wanted to experience your favorite movies outside of the cinema in a format you controlled, you had to go with the movie paperback. The novelization if you wanted the story in depth or the storybook if you wanted pictures from the movie (and, sometimes, things that were cut from the movie as in the Star Wars Storybook which shows pictures of Luke and Biggs on Tatooine). They, being of the Internet age, are pretty used to having any movie approved and licensed by big tech available at any time, although they will be the last amongst our people to remember going to an actual video store.

I must have seen the film at some time, but I am most familiar with the television series–enough to remember the star’s name even though he really hasn’t appeared in a leading role anywhere else. The television show lasted a season, my senior year in high school, when the fledgling Fox network didn’t have a full week’s worth of programming. According to the Wikipedia entry, Fox cancelled the series because it wasn’t making enough money at the time–but that its enduring popularity led to five television movies through the 1990s. Which is four movies past Firefly if you’re keeping score, brother.

Of course, by now, it’s a forgotten science fiction cult classic, maybe, so I should probably explain the setup. An automatically piloted alien ship appears out in California containing thousands of aliens that come to be called Newcomers (or Slags if you prefer the slur). These aliens were supposed to be slave delivered elsewhere, but inadvertently arrived at Earth. So the government has quarantined the aliens for a while but are helping to integrate them into human society. This has been ongoing for a bit–ghettos have formed where the Newcomers live, and some are starting to work alongside humans.

When human Detectives Sykes and Tuggle witness trouble brewing in the Newcomer area of Los Angeles, they witness and try to stop what appears to be a robbery in progress at a Newcomer-owned store. The robbers kill the storekeeper and then shoot their way out of the store, killing Tug. I think I’ve actually seen the movie and not the television show because I seem to recall this scene, with shotgun blasts punching completely though cars. But that might be a scene from another movie.

So one of the Newcomers on the police force is promoted to detective, and Sykes volunteers to partner with him. Although he’s not supposed to work on the case of his partner’s death, Sykes knows the Newcomer detetive, “George,” is working on a murder that might be related. So they navigate the hidden world of the Newcomers, finding a plot that deals with an alien drug ring and not the prevalence of super shotgun shells.

The book has a lot of good commentary on relating to The Other and integration, which means it’s certainly out-of-step for the 21st century. But they’re univeral themes, the alien in a host society, and the book explores some of these concerns without banging the race drum too much.

Foster handles the cinematic elements well, but the book’s pacing kind of matches some of the Executioner novels in that a larger part of early pages sets the tone and characterization, but then we get about three quarters through it and we have to cover the slam-bang finish and false endings in detail. Not on of Foster’s greatest works, but it’s still pretty good and kept him in kibble.

I don’t think anyone had actually read this paperback before. The spine was uncracked, and as I read it, the binding popped a couple of times and pages came loose. Which is okay, ultimately, as I suspect that once this book disappears into my paperback shelves, no one else will ever read it. Because, c’mon, man, I’m hoping to own the book for another couple of decades, after which I fully expect “reading” to be a lost art, and even if people still do it, most of it will be tech-approved content on tech-provided devices. But I digress.

I flagged a couple of things for comment as I’ve started doing, and I will risk the spine of this book further to provide this bit of commentary to you, gentle reader.

His hand reached out to automatically slap the rewind/playback switch on the answering machine. It whirred as he advanced on the kitchen. One time he’d put a funny greeting tape on the machine, a gag gift from a fellow officer. Only trouble was that his mother had called once and had been forced to suffer throught the tape’s bouncy barrage of four-letter words. All copspeech, unsuitable for mentally stable civillians. Now the machine requested its messages in a noncontroversial monotone.

When I finally moved out of her basement, my sainted mother bought me an answering machine so that she could leave me messages. In those days, although cell phones existed, they were still on the lower end of the adoption scale. I didn’t have one for a couple of years yet. I didn’t think I’d need an answering machine as I was not expecting a lot of calls. And, as I expected, she was the only one to leave messages. Well, mostly.

Also, note how much Foster has inserted here: In the movie, James Caan comes in the door and hits the button on the answering machine. But Foster adds depth with a little story about the protagonist’s mother. This separates the better novelizations from the lesser.

“Wrap sheet shows one armed robbery conviction, a couple for sale of a controlled substance. He also beat a number of raps back East.”

Copyediting on paperbacks was not a big line item on even major books from major houses based on a major motion picture even in the 1980s.

There was muzak in the air and the cheesy aroma of canapes on trays. Waiters moved obsequiously through the crowd, dispensing Perrier and champagne and soaking up a month’s worth of gossip which the more astute among them would peddle a little at a time and for high fees to the city’s more prominent columnists.

Widows mentions Pelligrino water, which is my preferred sparkling water brand simply because I am not hoity-toity, and in the 80s, Perrier was pitched to the hoity-toity as it is a marker for a high class function here.

Also note how Foster here also injects a little characterization for some of the wait staff. The line in the script might be “A busy party scene.” Or, I suppose, the script could have included some of this in its description. But I prefer to attribute it to the seasoned pro (more on that in a bit).

He tapped the picture. “That’s Kristin there. My daughter. It’s kinda an old picture, but you know how you get about old pictures. You always have this one special image of your kids, when they’re a certain age, when they look a certain age. When you’re seventy-five and they’re fifty, you’ll still see them the same way.”

Analysis: True.
I have a rotating set of pictures running on one of the monitors here in the lab, and since the Macintosh cannot recognize shortcuts nor include subfolders in its screensaver rotation, it mostly plays the root folder from one or more of my boys’ photo collections, which is disorganized photos from their extreme youth. And although they’re teenagers, about, now, they still have that toddler or little boy in them to me even though it was a lifetime ago to them. Not to me.

But Hasn’t Actually Scheduled a Wedding In A While
A paragraph later, talking about his aforementioned daughter’s wedding:

“When is the happy occasion?”
“Sunday. This Sunday.

In my experience, most weddings take place on a Saturday. Churches generally have other things scheduled on Sundays.

Of course, I’ve only been married once, and the wedding itself was long ago.

They sat at the table and talked about small things suddenly becoming large, big things that no longer seemed half so important, and the debris of a person’s life called memories.

Definitely a noir coloration in the black and white text.

The Other Oprah Effect

His partner refused to be mollified. “She’s very progressive, I’m certain she’s considering it. She watches television all the time, and not just the Newcomer channel. She’s taken up flower arranging in her spare time. If she can pick up a human habit as bizarre as that, why not also divorce?”

I’ve heard that the other Oprah effect is that women who find themselves at home start watching programs like this and that they then find unhappiness in their marriages and the path to empowerment and fulfillment following a divorce. A friend pretty much attributed his divorce on Oprah.

Based on the screenplay by Rockne O’Bannon

I first became acquainted with the name Rockne O’Bannon from the episode of the middle 1980s Twilight Zone series. The segment was called “Personal Demons”, and it dealt with an older writer named Rockne O’Bannon who is plagued by destructive physical demons who damage his car and whatnot and, when he confronts them, they say they want him to write about them. When he does, they leave.

Because the character Rockne O’Bannon is older in the show, I thought O’Bannon himself was older. However, O’Bannon was at the beginning of his career in the middle 1980s. He did several stories for The Twilight Zone, one for Amazing Stories, and then this movie. He’s also responsible for Farscape (which I’ve never seen and would probably confuse with Lexx very easily since I didn’t see that program either).

I mention it because I think it’s funny that I thought that O’Bannon was a grizzled veteran in the 1980s, but he’s probably not that much older than I am.

So, to sum up, a good novelization of a mostly forgotten science fiction film. But it makes me want to go out and get the DVDs for the movie, the television series, The Twilight Zone 80s edition, and maybe Farscape and Lexx. Actually, I don’t have to go out to get them; I can simply conduct an Internet search online and be shocked that it’s so expensive and not buy any of them.

Which is just as well–I don’t carve out time for watching television, so they’d languish on the cabinet for years until I got around to them. Because I spend my time reading books based on movies and television programs instead.