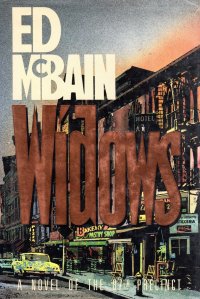 In keeping with my Winter Reading Challenge schtick, I have selected a book that would fit into two categories: One Word Title and Crime. Since we’ve already got Larry McMurtry’s one-word titled memoir about books Books in the one-word title slot, this will have to be my crime book for the challenge.

I first got into Ed McBain novels in the middle 1980s, about twenty-five years into the series, and I read a bunch of them from the library and from my aunt’s collection, out of order, but the eariler books, it seems, were more episodic and less serial in nature–but that might be only my memory of it, since Steve Carella first marries Teddy sometime back there, and his kids get born somewhere along the way. And patrolman Kling becomes a detective. So, nah, I’m mistaken. Strike this whole paragraph from the record, your honor.

But by the time the 1990s were rolling along, I was reading the books pretty soon after they came out, so I was following the series business in real time. But by now, I’m a bit lost. Who is dead by this book? Who has joined the team? Is Fat Ollie a force yet? I was thinking maybe there would be some small market for an 87th concordance to help put one back into the proper context when picking up a book in the middle of the series. Not that I would do that, gentle reader; that’s a lot of work, and I have many other things to read before I return to this series (although I did just spot a copy of Vespers on my bookshelves and, from a distance, thought it might be a duplicate of this book, so I might read that after David Copperfield).

In this book, the 87th has to find the killer of a kept woman. The man who was keeping her, an attorney, is also killed, and was the writer and recipient of any number of naughty letters reproduced in titilating detail in the book. In another part of the city, Carella’s father is killed during a hold-up, and the detectives from that precinct work on that case. The third main strand is that Eileen Burke, fresh from trauma that I’ll probably read about in Vespers, starts training with the hostage negotiator team. The first thread does not tie into the other two, but when they close in on the people who killed the elder Carella, they take a hostage, which ties those bits up.

So, definitely a good book. McBain was one of the masters, although by mid-career here, the books have expanded a bit to befit higher prices, I guess. And we have the cop-and-therapist trope. Maybe that just seems so outsized because it was such a thing in the Parker books. I dunno.

But I liked the book, and I’ve picked up McBain books here and there, so I’ll have to re-read them a bit as time goes by. Unlike John D. MacDonald, I think I have read all the McBains, although that’s probably only the ones that are easy to come by. Regardless, enough time has elapsed that I won’t remember the plots too clearly and can enjoy them with a little newness again.

I did flag a couple bits.

Actually, it was a greenboard. Made of some kind of plastic material that definitely wasn’t slate. Eileen wondered if the move she’d seen on late-night television last week would have made it as Greenboard Jungle.

Lombino/Hunter/McBain wrote the book The Blackboard Jungle, but not the screenplay.

I’ll Have What He’s Having

“Yes, sir, that’s it, Pellegrino, like the mineral water.”

In 1991, I would not have known what that meant. In 2021, I was drinking Pellegrino’s whilst reading it.

Tommy had moved back to the house that used to be his parents’ while he was away in the army. Nowadays, you did not have to say which war or police action or invasion a man had been in. If you were an American of any given age, you had been in at least one war.

Which was true at the time. When this book was published, it would have been Vietnam or Panama or Grenada; earlier books would have been World War II (the series began in the 1950s) or Korea. However, with the end of the draft in the 1970s, later generational military endeavors, from Desert Storm to the second Iraqi War and Afghanistan, were not widely shared amongst the young people. But you can still talk about veterans who have been overseas under fire.

And, as Yogi Berra once remarked, “When you come to a crossroads, take it.”

Ackshully, he said when you come to a fork in the road, take it. Perhaps McBain is misquoting on purpose?

What We Could Show McBain In The Future

The kid had been black.

That meant that one of the city’s foremost agitators, a media hound who liked nothing better than to see his own beautiful face on television, had rounded up all the usual yellers and screamers and had picketed both the project and the local precinct, shouting police brutality and racism and no justice, no peace, and all the usual slogans designed to create more friction than already existed in a festering city on the edge of open warfare.

Yes, he means Sharpton. But what would Sal Lombino think about Sharpton and 2020?

Shoot Him In The Leg

“And you’re wrong when you say she had to put him away. She didn’t have to. Her perception–and, again, the reality as well–was that this man was going to cut her if she didn’t stop him, she was going to get cut again if she didn’t stop this man. But she didn’t have to kill him in order to stop him. The man was armed with only a knife, and she had her service revolver, a .44 caliber Smith & Wesson–plus a .25 caliber Astra Firecat in her handbag. She certainly did not have to kill him. She could have shot him in the shoulder or the leg, wherever, anything of the sort would have effectively stopped him. The point is she wanted to kill him.”

The therapist is talking to Kling about Burke’s recent justified shooting, and McBain is demonstrating a bit of ignorance about guns and self-defense informed by popular culture which says that’s a good idea.

Help Is On The Way

That was the trouble when a city started sliding south. You couldn’t bother about the little things anymore. When people were ggetting killed, you couldn’t go chasing kids spraying graffiti on walls. You couldn’t ticket a truck driver for blowing his horn. You couldn’t bust people who were jumping subway turnstiles. When you had murder and rape and armed robbery to worry about, the rest was merely civilization.

You might think that in the Dinkins era. But a couple years after this book appeared, Rudy Giuliani became mayor of New York, and the police started enforcing a Broken Windows policy that says you do arrest and punish for those petty crimes, and the effects trickle up. It certainly seemed to work, and current large city administrations are looking to prove the opposite is true as well. Well, mainly, they’re just looking to limit prosecution for petty and small larcenous crimes, and the resulting crime spike is completely unforeseen.

Again, The Future Has A Surprise For You

The people form the nearby project all came out to watch the Late Night Show. This was either Die Hard or Die Harder on a summer’s night at the very top of August. Except this wasn’t a high rise in L.A. or an airport in D.C.

The third entry in the series, Die Hard with a Vengeance (1995) takes place in New York City. As you know, gentle reader, The City of the 87th Precinct is a stand-in for New York City.

The Preacher was in the streets already, doing what he did best, doing in fact the only thing he knew how to do, which was to agitate people into a frenzy. Pacing behind the barricades, long hair slicked back, gold chains gleaming in the reflected light of the spots, bullhorn in hand, he kept telling the crowd that whenever a white girl yelled rape, then the nearest African-American males were always accused of it…
“But take a pure innocent young virgin like Tawana Brawley, who gets reped by a screaming mob of white men who then scrawl the word nigger…”

I sure read a lot of books with that word in it. I must be a racist. No telling what Ed McBain would think of this modern world where characters like The Preacher are running the asylum. McBain passed away in 2005; he barely had any time to work in anti-Bush sentiments into his novels much comment on or embrace the rising ethos. When you read the books from the later part of the 20th century, you get a sense of cynicism and detachment. I’m sort of glad we didn’t get to see how earnest he might have become.

Don’t Now Much About Guns And Stuff (II)

She saw a big, muscular man with a close-shaved skull, wearking a white T-shirt, that was all she could see of him in the window frame. AK-47 in his right hand. Just the sight of that gun always sent a shiver up her spine. The illegal, Chinese-made assault rifle–a replica of the gun used by the Viet Cong–was a semiautomatic, which meant it required a separate pull of the trigger for each shot. But it could fire up to seventy-five shots without reloading, and its curved clip gave it the lethal look of a weapon of war, no matter how many claims the National Rifle Association made for its legitimate use as a hunting rifle.

Well, he got the semiautomatic part right, and that it should be illegal because it looks scary; however, the 75-round magazine is a drum, not a curved banana magazine. C’mon, man, do you even read Executioner novels (or, as the younger generations do, play first person shooters)?

Still, even though sometimes McBain’s politics seeps into the books–like that passage above, it’s not odious and permeating and he offers enough sentiments that an evil-thinker can agree with to make up for it.

So, yeah, McBain is up there with John D. MacDonald as masters of the craft that didn’t get to the phoning it in phase of a career or to injecting politics into the books so overtly as to alienate readers who didn’t vote for Dukakis. The books have depth, and just a bit of series business seeping in.

You will know how serious I am in the endorsement by how soon you see a report for Vespers. Well, I mean another one.