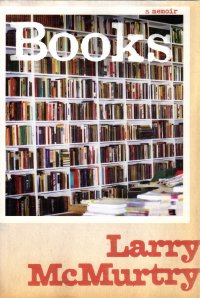 This book is a trifecta in the Winter 2021 Reading Challenge. I could count it in any of three different categories: Memoir/Biography, Book About Books, or One-Word Title. As I have already entries for the first two (Sid Meier’s MEMOIR!, Book Lust). So One-Word Title it is, which means I don’t have to read Linda Greenlaw’s Seaworthy out-of-order. But, Brian J., you read The Hungry Ocean and The Lobster Chronicles out of order, you might point out, but that’s different. Back when I got The Lobster Chronicles from the book club, I did not have her later work–and now I have All Fishermen Are Liars around here somewhere–so I have the luxury of reading them in order. If I ever do, that is.

Wait a minute, whose book memoir is this–mine or Larry McMurty’s? Both, gentle reader, both.

You might know Larry McMurtry as the author of any number of books, such as Horseman, Pass By, The Last Picture Show, Terms of Endearment, or Lonesome Dove–I say that because those books were adopted to films sometimes by McMurtry himself. Or you might know him as the guy whose shirts got pinched by Robert Clark Young.

In this book, McMurtry collects a number of musings and recollections about receiving books as a young man, buying books, and then becoming a book scout and a book seller in the 1950s. He ran a book store, first in Georgetown and then in his hometown of Archer City, Texas, until 2012 (after this book was written), so he offers insights into the secondhand and antiquarian book business through the mid-to-end of the twentieth century when it was a going thing. He also talks about the changes to the industry with the advent of the Internet, and how he was a throwback–which lasted only a little longer than after this book was published.

The chapters are short–the book has 109 in 258 pages–as the topical reminisces sometimes only last a couple of paragraphs. The book has no structure or flow, either, as the memories go backwards and forwards in time, with anecdotes of his youth following stories set later in his bookbuying (he prefers the experience of buying to selling). They drop a lot of names in the business but without a lot of character for most of them–just names, what store they were with, and maybe what they did once–but he somewhere says that’s intentional, as many of them have passed on and he doesn’t want to tell stories about people who cannot defend themselves. And the book ends not with a real conclusion, but a list of booksellers with whom he’s done business, including whether they’re out of business or not. He only lists two in St. Louis, Anthony Garnett and Lost Generation, neither of whom I’d heard of–and I was in the St. Louis area at the time. But McMurtry dealt in antiquarian books, not the cheap stuff I tend to buy.

So this book did not dissuade me from wanting to buy books and to read books and maybe even buy and sell books. As you might know, gentle reader, around the turn of the century, I spent my Saturday mornings at estate sales and garage sales looking for books and old games to sell on eBay–so I remember the thrill of that hunt and the triumph of a good find. I also marvel at how much McMurtry seems to read–he talks about re-reading certain books every couple of years, but I can’t make headway against my library without re-reading.

So I did flag a couple things for comment here.

I now own Mr. Taylor’s mansion and have filled it with about twenty-eight thousand books, which took a while.

I don’t know where I am–I have about 2500 books in my book database, but that’s books I’ve read and reference sets. I have no idea how many books I have on the to-read shelves–probably that many or a little more–so I have a ways to go. Although I will probably get a boost from collecting volumes in a set–say Reader’s Digest World’s Best Reading editions–whose individual entries I have already read. I know, the sets I collect are very middle-class tastes. But they’re currently affordable, and they’re something, and I’m accumulating them more than collecting.

I read these comics with shock, but I didn’t really become interested in comics until I was an adult, investigating the Yellow Peril panic, which in essence had the Mongol Horde riding agin. The various Fu Manchu movies starring Christopher Lee are the modern-day Yellow Perilism; and our current worries about being crushed by China’s economic might is an extension of the syndrome.

Well, that very glibly dismisses policy concerns by calling them racist without using the word itself, ainna?

A dealer in Wichita Falls made a big paperback purchase, and was happy to sell the vintage stuff to me. These numbered several hundred books, and contained at least eighty percent of the titles I sold to Greg [McMurtry collected the first five hundred titles from five early paperback publishers but sold his first collection]. When Booked Up [McMurtry’s store] purchased Barber’s Bookstore, in Fort Worth, I siphoned off a few hundred more, all of which now ring the shelves of what once, long ago, was Mr. Will Taylor’s servants’ quarters, a plain two-story brick house which we nicknamed the Petit Trianon.

I know what that is not because I lived near Trianon Parkway in the St. Louis area, but because I read a book about Versailles and the original Trianon last year.

Almost The Second Book In A Row with De Sade

Reminds Me Of A Bookseller I Knew

Ought dealrs to collect? A good many dealers just don’t seem to want to. Leo Weinstein of the Heritage Book Shop (now gone) once showed me his collection of first American editions of famous books. My polite view is that Lou Weinstein’s heart is not really in acquiring books that he can’t sell.

I once said to Sheldon, the proprietor of A Collector’s Book Shop in University City and later Maplewood, he who was notorious for gigging people by pulling books out of the bookshelves by putting their fingers on the top of the spines and pulling them out that way–I said to him, “I can’t imagine what your collection is like.” He responded by saying, well, chided me that his business is buying and selling books; he did not collect them.

And I am serious about his notoriety for gigging people–when I took people to the shop for the first time, I would tell them to watch for it, and surely enough, Sheldon would chide someone for putting their fingers atop the spines while we were there. My goodness, I have not thought about A Collector’s Book Shop in a while, but right now, I am walking through it–going upstairs and then into the other rooms above the shop next to his on the ground floor.

Not Unlike My Experience

Underlying all these adventures was one motive: I never wanted to be without books I wanted to read, and if I could be reading four or five books at the same time, so much the better. With books pouring into the shop almost daily, this was not a hard thing to achieve.

I do pretty well without running a book shop with the biannual library book sales and frequent trips to ABC Books. I could probably lose half my unread books–maybe two-thirds–and I’d still have enough to read for a lifetime. But let’s not take that risk.

At any rate, I thoroughly enjoyed this book which I have in a fine first edition with mylar over the dustjacket that I ordered from ABC Books during the great stay-at-home of 2020 (how’d that work out?), although I have personalized it with Cheeto dust and pizza grease. Which is just as well–I might be of the last generation, and perhaps a throwback amongst my generation–who loves books this way and who would really enjoy this sort of book and the attitudes contained within.

Which has a silver lining: cheap books in the near future, and plentiful kindling for my succeeding generations.

Amongst that future kindling, I have a copy of The Last Picture Show and maybe the movie book for Hud, the film version of Horseman, Pass By. Perhaps I shall pick them up after the reading challenge ends at the end of this month (and I finish the interrupted David Copperfield).