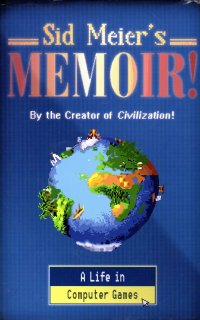 I bought this book partly with gift cards after Christmas. As one of the 2021 Winter Reading Challenge categories is Memoir/Biography, you can guess which one I picked up first. And, probably, which one I said to myself One more chapter a couple nights before going to bed, wherein one more chapter sometimes meant more than one.

Okay, so for those of you who don’t know who Sid Meier is: Well, this book can explain that. He was one of the founders of MicroProse, who left MicroProse to found Firaxis, and even before he created the Civilization franchise which continues to dominate my free time, he was responsible for numerous games that shaped my beautiful wife and I’s lives. MicroProse also did F-15 Strike Eagle and whatnot; he/they made Pirates! which I just installed on my Windows 10 box, and it works, but not in a nice windowed mode; and he was responsible for the licensed Magic: The Gathering game that my beautiful wife has been able to hack and install on machines up until Windows 10. So, yeah, we have played a lot of them.

The book tells his story from his youth, his learning computers, his time in Switzerland, and onto the rudimentary games that he wrote in college and as a young man working for General Instrument, a cash register company. Then he and Bill Staley founded MicroProse, and the rest was history in the making. They developed flight simulators, including Gunship which I played for hours and hours in the trailer in Murphy, Missouri, when I had time for hours and hours of Gunship, D&D, and watching movies over and over again on Showtime–however did I have that many hours in the day?

The early chapters recount the history of MicroProse and then Firaxis on an almost year-by-year pace, tying each chapter to video games released that year. In the early chapters, they come fast and furious, and Meier (and Noonan) work in his back story and early life while they do. Later, as Meier becomes a recognized brand and becomes more of a team leader and executive, and the actual narratives of game development and running the company fade, and we get more general musings on games as education and whatnot.

So Meier’s philosophy has always been to build something fun, not just something that will sell (especially by slapping Sid Meier’s name on it). He sticks to turn-based games mostly, and although towards the end we do get some modernization and some attempts at MMORPG and console games, his work still seems old fashioned in a good way.

So I liked the book, and I liked Sid Meier, the person, as presented in the book. It made him real, it made him humble, and it made him seem like a fellow I would like to know.