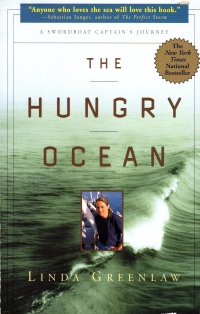 I just bought Greenlaw’s Seaworthy earlier this month, so I decided to pick up this, her first book, to get on with reading the complete canon.

I read her second book, The Lobster Chronicles, in 2009. I thought that book was a little disjointed, but that must have been something of a sophomore slump. The Hungry Ocean hangs pretty tightly together.

The book describes the events of a single swordfishing expedition, an approximately one month voyage from Gloucester, Massachussetts, to the fishing grounds east of Canada where the fishermen ply their trade. The book starts out with the captain, Greenlaw, taking on supplies and making lists, fretting about the return of her crew from their two days of shore leave, and then starting out, steaming, to the fishing area. There’s no great disaster to overcome (a la The Perfect Storm, the book and later film which have Greenlaw in them on the periphery). It’s just a normal fishing trip, but it goes into elaborate detail about the technology and techniques of commercial swordfishing as well as the captain’s considerations throughout the voyage.

It’s akin to Moby Dick in its technical descriptions, but is overall more readable. It’s got more detail than an Educators Classics edition of Captains Courageous. And it falls almost into the journals of George Plimpton, Dave Anderson, or Jerry Kramer in distilling the essence of a long, repeating sport or profession into a single block of that profession. Although Greenlaw is not a sport fisherman; she makes a living at it.

I’ve sometimes thought whether I could have done the work, ever since I was a young man regaled with the stories of that one friend of a friend who worked as a fisherman for a couple months a year and made enough for a whole year in a couple of trips (I actually did have a friend of my beautiful wife who did that for a couple of years before returning home for good). I don’t know. I’d like to think so, but the days were long, the conditions often poor, the work repetitive, and the reward uncertain and often underwhelming.

On the other hand, it makes for better stories than being a ronin software documentation and testing professional.

So I’m looking forward to the other two nonfiction books from Greenlaw and might someday delve into her recent mystery series as well, although I get the sense that I’ll have to order those books new. Or perhaps look over the fiction selection at the library book sales more closely.