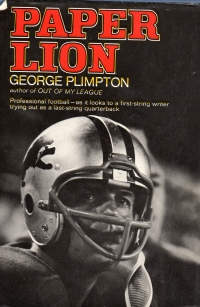 As a reminder, in this book, the author joins the Detroit Lions training camp as an old rookie quarterback. Supposedly, he’s undercover, but it comes out eventually. As such, he lives in the dorm with the players, does the drills, even participates in a scrimmage and dresses for a preseason game.

I enjoyed the book well enough, as it reminded me how complex the game of football is and how complex the individual motions of football are. Plimpton has a hard time learning how to take a snap from the center. This is something second nature to the quarterbacks who make it to the pro leagues, as they’ve done it at the very least in high school and college until the time they hit training camp. I’ve decided I want to be an athlete now that I’m too old for it, and I’m finding myself having to slow down and study very basic body movement to figure out how to stride properly while running and whatnot. So it had that going for it.

However, one knock about the book is the artificial conceit of it. In the second chapter, he’s skating with Robert F. Kennedy because he’s a friend of the family. Plimpton came from some station in New York, so he’s looking at everything with the eyes of someone from the upper West Side. It probably wasn’t so bad in 1960 something, but it’s a bit jarring in the 21st century, especially as some of the name-dropping comes off as just that. So I can’t help compare it to the Jerry Kramer books and unfavorably, as Kramer is a farm kid who’s in the NFL.

Also, I can’t help but note that the co-writer of Run to Daylight says Paper Lion is the best book about football he’s ever read. Well. He must be a Lions fan, or he must not be counting the book he wrote, ainna?

At any rate, it’s worth a read. I also have Plimpton’s Open Net about a similar stunt with the Boston Bruins. Time will tell how fast I get to it. Probably not in time for hockey season.