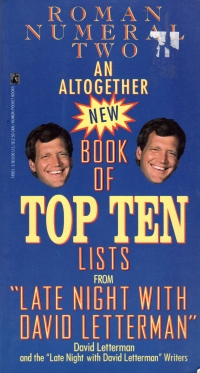 I got this book recently for quick football season reading. I remembered reading Book of Top Ten Lists (apparently 13 years ago). However, I did not recall specifically reading this book before (which I did, about eight years ago, when before my sainted mother fell ill and before I moved to Nogglestead–was there such a time in my life?).

At any rate, I said of the first book:

The same politicians from almost fifteen years ago are the same punchlines in some cases. Al Sharpton, for instance, is a common motif in Letterman’s collection. In O’Rourke’s more serious obra, we see the same names we curse today. Diane Feinstein. John Kerry (who would almost seem to have served in Vietnam longer than in Congress based on the way he talks about it–as though the former determined his behavior and honor more than the latter–it’s almost like M*A*S*H in a way, wot?). Lt. Governor Gray Davis. O’Rourke exempts Arnold Schwarzenegger. This was 14 years ago.

It’s funny: now, it’s twenty-five years past the publication of the book, and it is lousy with Donald Trump jokes. That makes it the second book I’ve read this summer from days gone by that make light of Mr. Trump (The Know-It-All being the other). It continues to illustrate how long public figures remain in the limelight sometimes, I guess.

At any rate, to reiterate, the book works best if you were alive in the late 1980s so you can understand some of the recurrent punchlines ripped from the days’ headlines (G.E. light bulbs! Haw, haw!)

But it did give me some brief amusement again, and it did kill the time between plays in a couple of football games. So worth my time, but your mileage may vary.