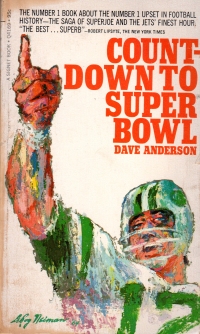 Subtitle: How Joe Namath Ruined Football. Well, no, it wasn’t Joe Namath that ruined football. It was the 1960s and the emergence of expressiveness, of personality over teamwork. Or maybe it was Pete Rozelle who made it a profitable iconic industry instead of a game people could watch and root for their favorite teams of blue collar journeymen like themselves. Or perhaps it isn’t ruined at all; perhaps I just wanted to make a snarky remark about Joe Namath and that upstart AFL team beating the Colts and Johnny U.

It is that time of year, of course: It seems that every year in August I read a football book to prepare for the season in my own fashion, just like every year after football I watch a couple of football comedies to come down from the season. In the past, I’ve read Vince Lombardi’s Run to Daylight, Jerry Kramer’s Instant Replay (twice, once in 2004 and 2015), and even Paper Lion. Run to Daylight recounts a week leading up to a game; Instant Replay covers the complete season; and Paper Lion deals with training camp. This book deals with the two weeks leading up to the third Super Bowl which pitted the Jets against the Colts, as I might have mentioned. Unlike the other books, though, this volume has a floating, free-form style that shifts between the various Jets players, some fans, Jimmy “The Greek” Snyder, and a couple of Colts players. I bet the author and perhaps even a team of researchers was embedded with both teams collecting material for this book and went with the Jets-heavy content because the Jets won. Or maybe not.

The shifting viewpoints really dampen the narrative, though, and whatever tension might be building up to the big game. Even with only a roster of 40 (as they had in those days), it rather drops a lot of names and profiles them for a paragraph or a page, and then moves on, and when the player reappears twenty or fifty pages later, you have to wonder, “Who is this guy?” So it’s complete at the expense of depth.

Anderson co-wrote two football books that I’ve read with John Madden (One Knee Equals Two Feet and All Madden), so he clearly knows football. But this book was less satisfying than the others because of its scattered narrative.

Still, not a bad read.

Interesting note that I flagged:

Don Weiss, the slim public relations director from Commissioner Pete Rozelle’s office, had supervised the issuance of credentials to 367 sportswriters, 253 photographers and 214 radio and TV people–a total of 834. (About 200 newsmen are accredited in Vietnam.)

This is the only mention of politics or The War in the book. As I said in my first review of Instant Replay:

Since the book chronicles an era before my birth, part of its charm lies in its details about a world I’d never know. Green Bay and Milwaukee described in the late 1960s and no mention of the War in Viet fucking Nam, man. Which differs, strangely, from the football season 2004, where the whole world’s talking about that war.

Ah, the good old days, where not everything was political.