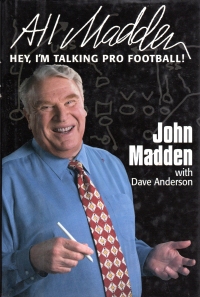 I rediscovered this book as I turned around the books on the shelves in the hallway, and it’s the right time to read a book about football, am I right? After all, once September starts, all of my reading is going to be coloring books and chapbooks.

This book comes ten years after One Knee Equals Two Feet. In it, Madden talks about his all-Madden team and the beginning of some football “traditions”, such as the Madden football video game, his bus (he didn’t like to fly), and the Thanksgiving turkey awards. He also talks about players he’d include on his All-Madden team (through 1996), including Jerry Rice and Emmitt Smith. Because this book only precedes my football fandom by about five years, I recognize the names of more of the players than I would in a book about the 1970s or 1980s (unless, of course, it’s a book about the Packers).

Madden also talks about coaching, officiating, and even other sports. It’s a quick read built on topical chapters, and it’s gotten me revved up for the football season more than the online reporting of the training camps and preseason have been. Contemporary journalism focuses a lot on personalities and injuries, but football books remind me how complex the game is and how difficult the playing of the game is. I need a reminder like that because I tend to watch something and think I could do it as well as the people on the screen. Which is not the case (as a recent visit to a ninja warrior sports gym reminded me physically).

So I enjoyed the book. Undoubtedly, he’s got other books available, and I’ll watch for them. It’s hard to believe he’s been retired for seven years (!) already, which is apparently long enough for me to mentally envision him and then think, “No, that’s John Candy.”

Oh, and I would be amiss if I didn’t point out that he alludes to having read Travels with Charley, and that he enjoys criss-crossing the country on his bus because he gets to see the country that way. How fun.

1 thought on “Book Report: All Madden by John Madden and Dave Anderson (1996)”