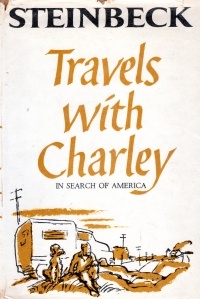 It has been over a decade since I’ve been really in a John Steinbeck phase; about fifteen years ago, I read Tortilla Flat, Cup of Gold, The Winter of Our Discontent, and Of Mice and Men in quick succession. I’ve since read The Long Valley. And although there are a couple of Steinbeck books on my shelves (East of Eden and Cannery Row), it had been years since I picked up a Steinbeck, which is odd since he’s classic literature that I like to intersperse with the Executioner novels that are my normal fare. So I finally picked up this book.

This book is written twenty years after those prime novels listed above. By the early 1960s, John Steinbeck is John Steinbeck; instead of California, he lives in New York and is known about town and about the country. He decides to get into a camper and drive around the country with his dog Charley. This slender volume is the result of that effort.

On the one hand, as I read this book, I recognized the stylistic influence Steinbeck had on modern prose, including the literate pulp of the latter twentieth century. As I read, I could easily think that John D. MacDonald or Travis McGee was narrating the adventure.

On the other hand, the focus of the book and the theme are a bit underwhelming. I’ve mentioned before a couple of the things of note (Inside a Certain Mindset with John Steinbeck and Layers and Layers of Fact Checkers Circa 1962). The book has a couple of incidents where Steinbeck recounts his interaction with people–a family of French Canadian migrant harvesters in Maine, a New Englander he has into his camper for coffee; veterinarians who take care of Charley along the way. He also has a couple of places where he waxes on places he visits, including several pages of glowing on Wisconsin. However, the book itself dwells mostly on Steinbeck’s seemingly unrelated musings on Life and the Big Questions. The final segment of the journey, natch, is a journey through the South and musing on the Race Question, including a segment where Steinbeck talks to an older white man for a bit and then picks up a black man walking along the road to uncomfortably interrogate the reluctant sample of the Negro population.