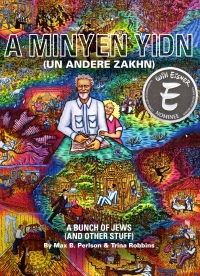 As I mentioned, I got this book at Library Con just a week ago.

As part of my reading habit, if I get to a natural stopping point, such as the end of a short story, in my reading late in the evening, I’ll pick up a comic book to pass a few more minutes before toddling off to bed. But due to a delayed trip to the comic store, my supply of fresh comics was depleted, so I picked up this collection to serve the same purpose until I could get back to the comic book store. Which it did. Also, it doesn’t hurt that I’ll count this as a full book whereas I don’t count the comic books I read (yet) in my annual tally. But given how few books I’ve completed thus far in 2018, this might be a logical step to gaming my own system. Fortunately, though, football season is coming up, and if the Packers are any good this year, I’ll have three hours a week to page through art books, cartoon collections, and poetry chapbooks.

Well, that’s quite a digression from talking about this book. Back to the matter at hand.

The source material for this book is a collection of short stories, vignettes and slice-of-life bits, written and published by Max Perlson in 1938. They’re about life in America for an immigrant or life in the eastern European shetl where he grew up. His daughter, Trina Robbins, grew up and got into comics in the 1960s and became something of a known name in some circles. She read his book and adapted them to comic book form and had a number of comic artists she knows draw art based on the text. So we have a collection of short pieces each in a different style of art and lettering.

The stories themselves are mildly interesting and vary in depth. Some are more geared to Jewish readers (relying on some knowledge of the culture and religion for poignancy), but some are more broadly approachable stories. The varied art forms, well, vary in their efficacy. Some lettering is harder to read than others, but I think part of the point of the book was to let various artists interpret the material in their own way. As I’ve lamented in other comic book posts, comics have often become all about the artists and the pictures and not so much about the stories. Whereas this volume is about the stories, it can illustrate the deleterious effect of art upon the story.

At any rate, worth picking up at a con when the publisher is discounting books she does not want to ship back to Winnipeg.

Oh, and a quote I flagged in the introduction:

He [her father, Max Perlson] learned well; our home was filled with books, all of which he had read, and because they were around, I read them, too. Among them, I remember the complete Mark Twain, Dickens, the poems of William Blake and John Keats, the memoirs, god help us, of Ulysses S. Grant.

As you might remember, gentle reader, I picked up a copy of those very memoirs last year so I could have a reading copy. One wonders why the “god help us.” One doubts the author wanted the South to win the Civil War.