As you might remember, gentle reader, I inherited a box of my grandfather’s old books when my aunt passed away a little over a year ago. They have remained in the box as they include a fourteen volume (plus index) set of The Classics in Greek and Latin from 1909 that I really don’t have shelf space for as a unit. Although I did get the books that I stacked on it during the great ABC Books ordering frenzies during the lockdown of Spring 2020 moved up into the shelves, the box has remained on my office floor the whole thirteen months. And I’ve had to move it around to keep it from the background of video computer calls during that period. The number of which has been increasing as I’ve been interviewing for other work and presumably will continue once I accept an offer since everybody does video calls now.

I recently ordered a small roll of clear book-covering to put over the covers of some of my older works, especially the ones I hope to read some day–I recently covered a nineteenth century collection of poetry with an old paper bag the way we did old text books back in the days when public school kids learnt something instead of playing computer games all day on suddenly imperative expensive school budget line items (get offa my lawn).

I wasn’t kidding about the paper bag. 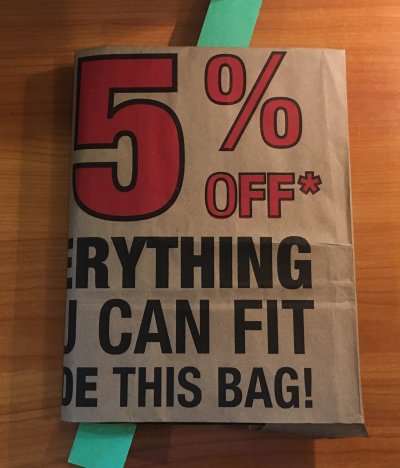 It’s an 1886 copy of Mrs. Mary D. Brine’s From Gold to Grey, a collection of poems of what appears to be an American Romantic sort–I covered it to protect it whilst I browsed it during football games, but I didn’t get too far into it before the football season ended.

So I spent some time this week using up that small ten-yard roll of plastic. I got the 16″ wide stuff, which was probably too wide for my application as I cut several inches off of it for each book. But I did wrap the Brine:

My wrapping is not really tight yet, and I don’t use squares, protractors, and cutting boards like I’ve seen in the YouTube videos, but I am an amateur here.

So I had enough for the fifteen volumes plus index of the 1909 Parnassus Edition of The Classics: Greek and Roman by the Vincent Parke and Company, my grandfather’s copy of The Poetical Works of Alexander Pope Illustrated from the 19th century, and the Longfellow I just bought.

Here’s the slightly-wrinkly collection of the classics in their new home: 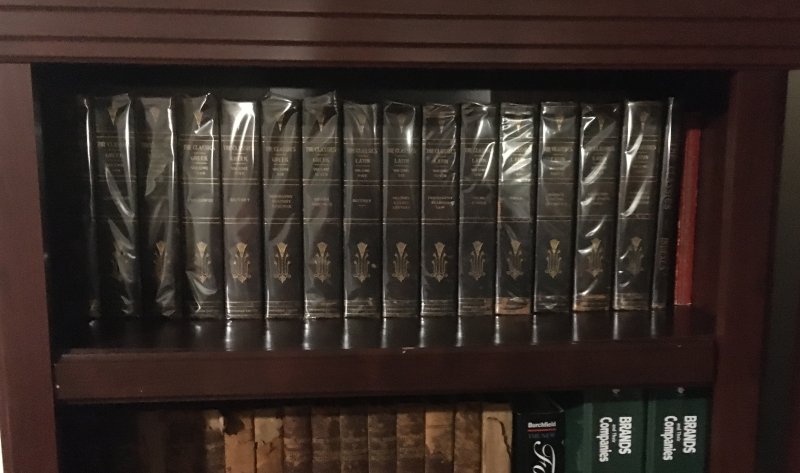 I have numerous other books I’d like to cover, but I might hold off on ordering another ten yards from Amazon or something like the 100-yard rolls directly from Brodart because covering those books is work. I mean, in addition to the couple of hours actually covering the books (badly), I spent four hours moving and tidying the bookshelves to make room for these books. I might not have to put in that level of effort in covering, say, covering my Edna St. Vincent Millay books, but you never can tell. This also probably leads me to buying another smaller roll than a bigger one so I can tackle these projects in smaller chunks.

Maybe after my nap.

However, hopefully practice will make me better at it.

2 thoughts on “The Covered Books of Nogglestead”