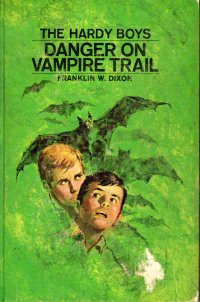 As you might know, gentle reader, the Winter 2021 Reading Challenge has a category Re-read a Childhood Favorite. At first, I thought I would skip this category–one only needs to fill out five to get the free coffee cup–but when I was dusting and re-arranging the shelves last Sunday, I came across this volume. Which I have owned since childhood, gentle reader; this book was one of the books that my recently departed aunt gave to us because her step-children had outgrown them. That was when we were young and in the housing projects; we got a little bookshelf and a couple dozen volumes of young adult literature, which in those days meant a Hardy Boys book (this one), a couple volumes from other mystery series (Nancy Drew, The Power Boys), a couple of boy-and-his-dog books, and a couple of a young-person-and-his/her-horse books. As you might guess, I read most of the mystery books, but the books about pets? C’mon, man, I was living in the projects. Murder and crime, I could imagine. Pets? No way.

So this might trump (sorry, is that word verbotten yet? No? But it will be, and here I used it before it was officially double-plus-ungood) Me and My Little Brain as the longest time between re-reads. I re-read that book in 2018, but I am not sure in what order I read these books in my youth to establish which I might have re-read after thirty-eight years and which I might have read after only thirty-seven-and-a-half years.

In this volume, Frank and Joe and their chums Biff and Chet (who were The Missing Chums in an earlier entry in the series–forty-three years in real-time) go out west to the Rockies to investigate credit card forgers, and they come up with some illegal sapphire miners to boot. So, yeah, that’s it. They travel, have some adventures and whatnot, and solve the mystery of Vampire Trail, which is a path that leads up the mountain to the villians’ redoubt.

You know, for someone who feels as though he was steeped in the Hardy Boys’ mythos, I can only say for certain that I read three of the books. This one, and The Missing Chums and The Twisted Claw, but surely I read more of them when I was young, ainna?

I’ve tried to get others into the series–when he was young, I bought my half-brother the first two books in the series for his birthday or for Christmas and told him that I’d get him a new one every time he finished one. He never hit me up for another, so I don’t know if he ever read them. I’ve also picked up other copies from the series and set them out for my boys to read, but I don’t think they got into them. I asked the youngest, and he said in not so many words that they were too formulaic. How sophisticated the youth have become through the years. Although I think it’s more that they didn’t have enough cartoons in them.

At any rate, it ticks off a box–or fills a line–on the summer reading challenge form. And, as my wont, as far as one can develop a wont in but a month and a week, it would fulfill two categories: Re-read a Childhood Favorite and Crime. So I have not filled out the form completely (yet), but I have filled it with things that cross categories.