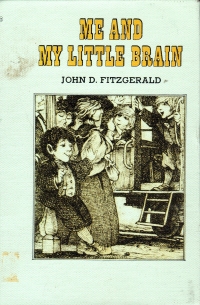 I read the Great Brain books in elementary school, and when I had children, I started picking the volumes up for my boys. Apparently, I picked up two copies of this book as I found a duplicate copy on their bookshelves while helping them clean their room this summer. So I put it on my to-read shelves for nostalgia’s sake.

The copy I have is an ex-library copy in the heavy library binding, which is only appropriate. Apparently, the books are available in paperback, too, but I got them from the school or public library, so I only understand the book in library binding.

If you’re not familiar with the Great Brain series: These fictional stories tell about a Catholic family in a small town in Utah at the end of the ninteenth century. It starts as a family of five: Mama, Papa, and brothers Sweyn, Tom, and John. The middle son is a swindler who comes up with all kinds of crazy schemes to make money or trick his younger brother John (the first person narrator of the book) into doing his chores. The first books deal with this, but this particular volume details when Tom goes off to the Jesuit Academy in Salt Lake City for seventh grade. John hopes to take up Tom’s mantel and make a little coin using his own brain, but it doesn’t work out that way. The book basically has three story arcs: The first couple of chapters are John trying schemes and failing. The second deals with the family (which is just Papa, Mama, and John along with their hired woman Aunt Bertha at this point) taking in a traumatized four-year-old whose family was killed in a mudslide before his eyes. The third deals with an escaped outlaw who has come back to town to kill the men he holds accountable for his incarceration–which includes Papa.

Re-reading this as an adult, I still enjoyed it. The writing is perhaps a little simpler than you would expect for an adult book–but, honestly, the language in a lot of books these days, especially the genre stuff I tend to read, isn’t exactly Faulkner. When I compare this young adult literature to the stuff my kids favor, though, it’s quite heady literature. My boys said they’ve read them, but they’re not exactly clamoring for more, unlike the excitement they demonstrate when a new comic/novel hybrid by Jeff Kinney or Dav Pilkey appears. Which will probably make them into adults who read comic books, if at all (wait, what? I read other things besides comic books and young adult literature, but I’m in the very selective minority).

It also struck me as I researched John D. Fitzgerald after reading this book how contemporary to my childhood these books were. This particular book was first published in 1971, which means I read it when it was ten years old or less. That’s a crazy thought–they seemed so much older back then, partially because they depict life so long ago and probably partly by how worn the library books were–probably due to popularity and cheap paper more than actual age. After reading this book, I’ve thought about seeking out some of his other works, including his adult book Mamma’s Boarding House, which I tried to read at age eight or nine, but I could not because it opens immediately after Papa’s funeral, and it was too painful to imagine life without a father (spoiler alert, little me: in a year or two, you’ll get to experience it for real by parental decision instead of death). So expect me to be cruising eBay this autumn looking to fill out my personal collection (as opposed to my boys’ collection).

Also, check out the list of other books you will enjoy: 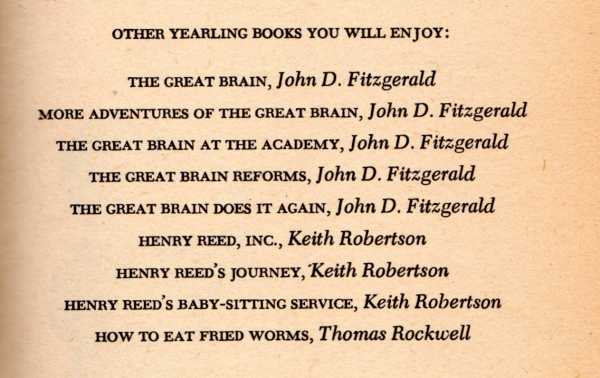 Analysis: TRUE. I did enjoy all of these books in my elementary school years along along with the Beverly Cleary books (although I thought Henry Huggins was the main character and didn’t understand until later why Beezus and Ramona got all the stories). They made me into the get-rich-quick grifter I am today.