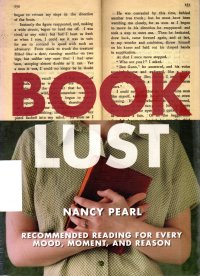 This book fills the Books about Books slot in the 2021 Winter Reading Challenge. The conceit is that it’s a topical list of reading that identifies a topic and then lists a bunch of books about the topic that you might want to read. The author is a long-time librarian and a contributor to a public radio station or two.

With that in mind, one might think the book lists would skew in a certain political direction. One needs only get to the American History Nonfiction section, page 20, where the first recommendation is A People’s History of the United States by Howard Zinn. Okay, so, yeah. But the politics don’t overwhelm the book–it was 2003, after all, and Bush was only slightly Hitler when the author was finishing the book. So the politics are not overt nor hateful, but some do inform the choices and the selections of topics.

The books comes off as a series of listicles, like you might find on a blog back in 2003 (or 2021). I found myself skimming more than reading, looking more for books that I have read that she recommends (some) more than recommendations (I already have thousands to read on my shelves, so I won’t be rushing out to buy new books until…. well, the next time I go to ABC Books, which is likely soon).

She has some author-specific “Don’t Miss This Author” recommendations which include Robert Heinlein and Ross Thomas, authors whom I have read and enjoyed.

I flagged a couple things:

In the topic Biographical Novels:

Reading The Death of Ché Guevara by Jay Cantor makes it easy to see how the charismatic Castro’s closest pal during the Cuban Revoluton was. The book is fast moving and sympathetic to both Ché Guevara and the cause. Cantor was clearly as captivated by the energy and humanity of the man as were Ché’s many followers.

So, yeah, politics inform the selections. But not hatefully. Strangely, too, she applies the accute accent to his name even though it’s not represented in the book title or other references to Che’s name.

The following, from the section Politics of Fiction, is even more timely now than in 2003:

Charles McCarry’s Shelley’s Heart tells the story of a presidential election that is stolen by computer fraud, and the winning and losing candidates whose lives are changed by the outcome. Eerily familiar, this is a perfect novel for today’s paranoia-filled world.

I also flagged a couple books I’d read or will read soon–she mentions Steven Saylor, whose Last Seen in Massilia I read in ancient times and one of whose books I stacked up for the Historical category in the 2021 Winter Reading Challenge–and also Jane Eyre–but I stopped flagging the books to whose book reports I could link. They were scattered enough that I was not tacking a slip to every page.

At any rate, I didn’t really flag any books to hunt down, as I mentioned (except maybe The Golden Gate, a novel made of sonnets), but perhaps I will kind-of, sort-of remember the recommendations in the book when confronted with some of the authors mentioned within at the book sales. But I likely won’t remember acutely why I decided to pick up an Iris Murdoch or why I decided to read The Last Picture Show, which I have in paperback on the outer rank of books in the hall, soon.

But it did fill a line in the 2021 Winter Reading Challenge form, so I’ve got that going for me, which is nice.