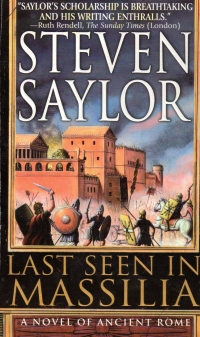 Strangely enough, although I thought I put the books in series order on the shelf when I first put them on the shelf, when I grabbed the first book on the left, I got this volume, which is number 8 in the series, but not the first one of the series I own. Now, it becomes very clear that the books have the series number and the year in which they take place written in marker atop the pages, but I did not know this when I grabbed the book, so I got one in the middle of the pack I own.

This book finds Gordianus, the Finder, sneaking into Massilia, which is under seige by Caesar’s forces in the Roman civil war. Gordianus’s adopted son, a spy for Caesar, has disappeared in the city, so Gordianus and his son-in-law pose as soldiers entering Massilia by a tunnel. When the tunnel assault is washed out, only The Finder and his son-in-law survive and make their way into the city where they become acquainted with the Scapegoat, an outcast chosen to take on the sins of the city and who sacrifice themselves. The group witnesses a murder or suicide from atop the sacred Sacrifice Rock and are approached by a leading Massilian to search for his missing daughter.

It’s intrigue and a bit of mystery wrapped in a bit of historical research that runs pretty smoothly, but does on a couple of occasions–sentences really–come out and have the characters speaks a bit of exposition. So it’s not without a touch of that, but it does get one into the setting and the time period rather well.

It is a bit intriguey for my tastes, but not so bad that I won’t read the rest that I have, starting with the newly rearranged first I own.