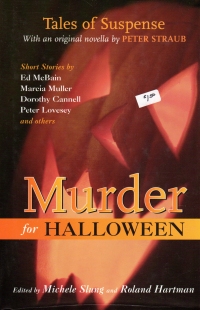 I started this book on Halloween, appropriately enough. Which means it has taken me over two weeks to read this one book, which hardly justifies my profligate book buying habits. However, in my defense, the short story form leads to earlier reading stoppage in the evening, as instead of maybe just reading one more chapter of a novel, I have to think, “Do I want to read a whole new story with whole new characters and a whole new narrative style and situation tonight?” Often, the answer was no.

That’s not to knock the quality of the short stories in the volume; they’re all crime stories, not all of which include murder, centered on Halloween. Most have been published before, which explains why I’d read one of them before, an Edward D. Hoch Nick Velvet story I probably caught in its first appearance in a Ellery Queen.

At any rate, the book includes:

Some of them are straight crime fiction, but some slide into horror and fantasy. “One Night At A Time”, for example, deals with a vampire detective. A couple of the stories are told from the perspective of children, such as “Yesterday’s Witch” and “OMJAGOD”. Some are of the quality of detective magazine filler, such as “What A Woman Wants” which is about a police squad looking for a smash-and-grab thief that uses Oldsmobile Cutlasses in his crimes, and the antagonist has a ride along magazine writer and agonizes about how to approach a fellow cop for a date fishing.

So it was a timely read when I started it, but a time consuming read once I started it. The biggest takeaway I got was in reading the Steven Saylor story set in Ancient Rome. I have a number of his paperbacks that I picked up some time ago, and his short story here has given me the excuse to pick one of them up.