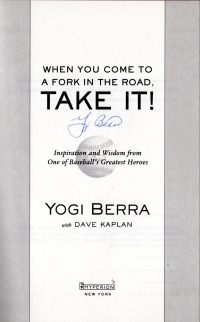 As I might have mentioned, I found this book when I went looking for The Legend of Gilgamesh. This book was on the book shelf where I’d last seen the earlier work, so I read it instead when I could not find the epic. They’re almost the same: You’d have to explain to anyone under thirty-five who either of these guys is. Or was.

At any rate, this book collects a bit of Berra’s recollections from his life in baseball and presents a little life advice based on it. That’s about it. He talks about breaking into the big leagues, playing in New York in the days before baseball players made millions, and his youth in St. Louis. It explains how he got the nickname Yogi and, more importantly, his real name (which is probably available on his Wikipedia entry, but I’ve never looked at it). Both of which could help me should they come up in a trivia night. Which would have to be run by someone older than 35.

A nice piece of filler reading material. It won’t change my life, but it was pleasant. Also, take a look at that title page: It looks as though this book is signed by the author. How cool is that?