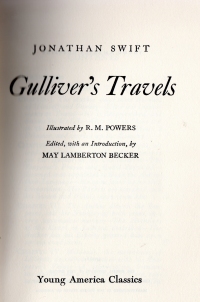 Anyway, the title page doesn’t say it’s abridged, but it is Edited, with an Introduction, by May Lamberton Becker, which looks as though it means adapted by. The book collects three of Gulliver’s travels (to Lilliput, to Brobdingnab, and to Laputa, Balnibarbi, Luggnagg, Glubbdubdrib, and Japan. It omits the fourth, the Voyage to the Country of the Houyhnhnms for some reason. Perhaps this was a darker bit not suitable for Young America right after World War II.

I assume you know some of the story. Although, in the 21st century, perhaps that’s optimistic. Gulliver, a ship’s surgeon, is shipwrecked at various times and finds himself in a land of tiny people (Lilliput), of giant people (Brobdingnab), and a land of a floating island and strange academics (Laputa et al). The book is satire, almost 300 years later some of the elements of the satire is lost. For example, I’m not sure what elements Swift is making fun of in Lilliput, or whether he endorses or mocks the society of Lilliput where:

Whoever can there bring sufficient proof that he hath strictly observed the laws of his country for seventy-three moons hath a claim to certain privileges, according to his quality and condition of life, with a proportionate sum of money, out of a fund appropriated for that use; he likewise acquires the title of snilpall, or legal, which is added to his name but does not descend to his posterity. (p54)

I can’t tell here if he’s advocating what the contemporary left calls a living wage or if he’s making light of it.

Other lines seem completely relevant today. For example, Gulliver explains to the Brobdingnabian king how the government works in England, and the king there replies:

“My little friend Grildrig, you have made a most admirable panegyric upon your country; you have clearly proved that ignorance, idleness, and vice are the proper ingredients for a legislator; the laws are best explained, interpreted, and applied by those whose interests and abilities lie in perverting, confounding, and eluding them. I observe among you some lines of an institution, which, in its original, might have been tolerable, but these half-erased, and the rest wholly blurred and blotted by corruptions…”

In Lagado, Gulliver learns how everything went amok:

The sum of his discourse was this: That about forty years ago certain persons went up to Laputa, either upon business or diversion, and after five months’ continuance, came back with a very little smattering in mathematics, but full of volatile spirits acquired in that airy region. That these persons, upon their return, began to dislike that management of everything below, and fell into schemes of putting all arts, sciences, languages, and mechanics, upon a new foot. To this end they procured a royal patent for erecting an academy of projectors in Lagado; and the humor prevailed so strongly among the people, that there is not a town of any consequence in the kingdom without such an academy. In these colleges the professors contrive new rules and methods of agriculture and building, and new instruments and tools for all trades and manufactures; whereby, as they undertake, one man shall do the work of ten; a palace may be built in a week, of materials so durable as to last forever without repairing; all the fruits of the earth shall come to maturity at whatever season we think fit to choose, and increase an hundred-fold more than they do at present; with innumerable other happy proposals. The only inconvenience is, that none of these projects are yet brought to perfection; and, in the meantime, the whole country lies miserably waste, the houses in ruins, and the people without food or clothes. By all which, instead of being discouraged, they are fifty times more violently bent upon prosecuting their shcemes, driven equally by hope and despair: that, as for himself, being not of an enterprising spirit, he was content to go on in the old forms, to live in the houses his ancestors had built, and act as they did, in every part of life, without innovation. That some few other persons of quality and gentry had done the same, bute were looked on with an eye of contempt and ill-will, as enemies to art, ignorant, and ill commonwealth’s men, preferring their own ease and sloth before the general improvement of their country.

The third of these voyages seems the most readily accessible to modern audiences, especially if those people have already read Atlas Shrugged.

So it took me a while to get through it, but I enjoyed the book. I was ashamed to learn the source of the word Brobdingnabian; although I have an album by the Brobdingnabian Bards and run across the adjective from time to time in writing, I hadn’t really learned or retained its source. I have now.

Also, I learned a bit about the history of seafaring. Not so much because Gulliver travelled the seas; instead, it’s because he’s excited about the prospects of immortality when he learns of a group of immortals:

I should then see the discovery of longitude, the perpetual motion, the universal medicine, and many other great inventions brought to the utmost perfection!

Of those, we only got longitude, and not that long after this book appeared. It makes a lot more sense the conceit of a bunch of undiscovered lands when you realize that mariners for hundreds of years (by hundreds, I mean thousands, except I really only count the hundreds of years of Western voyaging out of site of land) could tell how far north and south they were, they had no real idea how far east and west they were. Whoa.

So it’s a good adventure story and classical literature, so I’m glad to have read it. I’m almost afraid to see what happens in the Jack Black movie based on it. Probably not as much satire as the original included, but I’ll understand the humor of crass 21st century better than the finer points of 18th century satire.