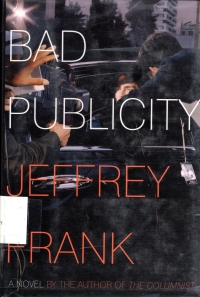 I read Frank’s earlier novel The Columnist in 2005; some number of years later, I picked up this book at a book sale here in Springfield, and it will take me at least another decade before I read another Frank book.

This book is billed a satire (and the book flap even compares Frank to Jonathan Swift, a fact I didn’t know when I picked up the Frank book right after Gulliver’s Travels). However, I didn’t find much mirth in the book since it, like the earlier novel, lacks a sympathetic character. It describes a number of interconnected people in Washington in late 1987 and 1988 whose lives intertwine at the end of the Reagan presidency and what most assume will be the beginning of the Dukakis era.

There’s a former Pennsylvania congressman who lost his seat after divorcing his wife for his assistant. His marriage to the younger woman ends ugly even after he’s forced out of his post-Congress job after making some overtures/compliments to a young female attorney with the firm who presses for his discipline with the firm because she’s tired of men treating her as a sex object, although it’s not as bad as she makes it out to be in her own mind. She conspires with a man whose wife works with the local news anchor who is going insane to get the word out about the former congressman and to get him denied a position in the White House. The former congressman consults with an image management firm and gets assigned to a down-to-her-last-client chain-smoking publicist whose assistant happens to be working closely with the local anchor who is going insane. There’s also an academic at a think tank who’s not working on his book on social reform and who’s been supplanted on the scene by a new expert in his subject matter and, well. Washington people and The Columnist Brandon Sladder appears in all the coolest restaurants at all the best parties.

So these people do their silly things and conjugate in their silly ways, and there’s nobody really for someone outside the northeastern corridor to identify with (and hopefully nobody that most people in the business would really identify with either). I got the sense while reading it that Frank didn’t really like anyone he was writing about, either.

So I didn’t care for it. There’s no mirth for me in laughing with the cooler-than-thou kids at schmucks, even if they’re schmucks ruining the country.