As you know, gentle reader, I received a gift certificate from a real record shop for Christmas and went to spend it over the holidays. Was that only two weeks ago? Man, it seems like a long, long time ago.

At any rate, I had just bought a couple Chuck Mangione albums three days earlier while redeeming gift cards with the children, so I was clearly in the mood. But I didn’t find Feels So Good, the album that contains the nine-minute version of the hit song which WSIE plays from time-to-time and what I consider the epitome of light 1970s chill music.

Well, I had a little time to kill yesterday before picking my youngest up from an afterschool activity. Instead of going to Hooked on Books, I went to the nearby antique mall flea market, Ozarks Treasures, to walk off a half hour. I figured if nothing else, I might find some Christmas gifts for 2021’s survivors. 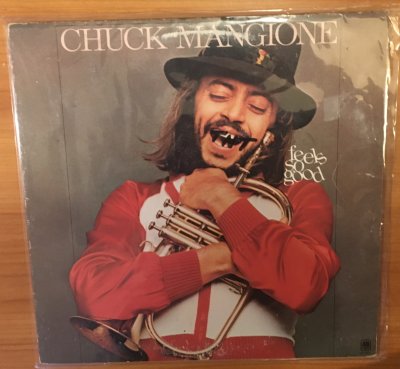 Someone has written TNT over his mouth; they did not selectively blacken teeth. Which is a subtly less offensive defacing.

I might have flipped past this record several times in 2019 and 2020 and only consciously discovered it now as I am building up my Chuck Mangione collection.

The guy behind the counter recognized Chuck Mangione, but only because the cashier said Chuck Mangione played himself in the cartoon King of the Hill several times over that shows run (which ended 10 years ago, old man). Which probably explains why the fellow at the record store recognized the name Chuck Mangione but not the album Feels So Good or the song by the same name. Ay. I am an old man: recognizing the old musicians for their music and not their appearances in animated television shows.

At any rate, a word about the antique mall/flea market market: I have noticed over the late Christmas shopping season and this trip that the stores have a higher than normal number of empty booths. Perhaps the new normal temporarily until these places go out of business completely, the next new normal. The number of booths with records was smaller, too, weighted a bit more heavily to booths with $10 common records versus $2 common records. I saw piles of video media, some booths with DVDs at $1 or $2 (cheaper than buying them at a defunctuating video store, but not the same experience browsing) and some booths with VHS cassettes at $10. So less to look over overall, but still, one always has the chance of finding a steal like I did yesterday.

1 thought on “Why I Shop For Records At Antique Malls”