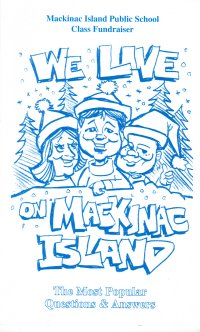 This book is a little FAQ put tohether, presumably, by the public school on the island. It has about 500 full time residents, and they mostly live in the settled neighborhoods, and, yes, they have a grocery store and a hardware store that are open in the winter.

A quick read as it’s a booklet and a good reminder of the time we went there. And a couple bucks for the school which they’ve already spent.

Something about it, though, is hitting me in my hermit spot. I mean, we’re finishing the first, what, third? of brown season here in Missouri. We had a couple of days of snow dustings a week and a half ago that made it look wintery, but…. I read this book, and I have this craving to go live in a small, snug cabin up north with me, my books, coffee, soup, maybe some salted fish, and a wood fire where I would, I dunno, write and work seasonally and then hole up for the entire winter with permission to sit and read and nap.

Of course, it sounds nice, and it might be a good month or season, but I probably would tire of it after a bit. But I do get all hibernatey in the winter time, going out somewhat reluctantly. Which is weird because it doesn’t tend to get wintery like I associate with Winter down here.