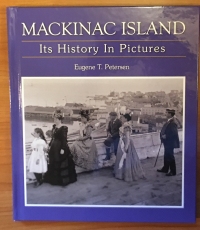 I bought this at the Island Book Store on Mackinac Island when I was up there last week.

As you might know, when I travel or where I live, I like to pick up a book on the local history. I picked up a couple of books about Mackinac Island, and I started with the picture book because it was easier to browse in the airports and on the planes that brought me back.

This volume is the second edition of a couple thousand copies, mostly sold to the tourists like me, I bet. It has a collection of images, which includes photos the middle of the 19th century, but also maps and drawings of the area and principals. Mackinac Island’s history traces back to the fort on the island that has been strategically important since before the Revolutionary War, so there’s a lot of history to represent, but relatively few photos until it becomes a tourist destination around the turn of the 20th century.

As such, most of the images are of tourists, hotels, and attractions with a smattering of photos of old buildings from pre-photography days taken in photography days.

It’s a quick browse and a bit of an educated, historical piece of memorabilia to remind one of his visit to the island. But for real historical narrative and insight, I expect one will have to delve into the actual textual books one purchased in Michigan.

Note: It’s not the height of pretentiousness if the author calls himself “one,” or even “the author,” if the one author does not capitalize. Thank you, that is all.