So when we make the change the linens on the beds here at Nogglestead, it’s game on for a couple of our cats. Roark likes to jump on the bed and chase his tail while we settle sheets and blankets on him, after which he will pounce out if we turn the linen so his head is near the end.

It worked, briefly. I got fitted sheets on both beds and a flat sheet down in the master bedroom, when an unexpected complication arose. 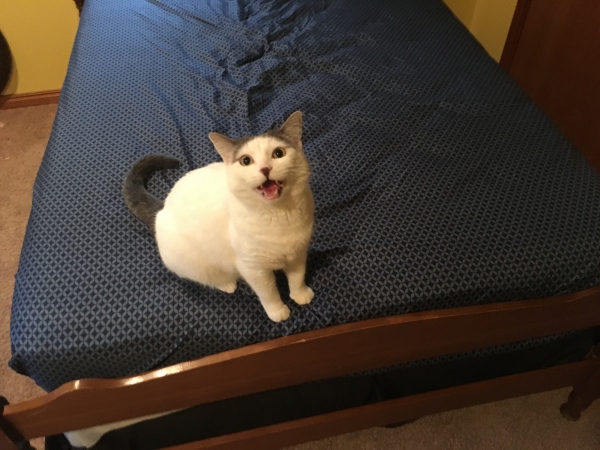 Now, Chimera plays a different game: He will lie without moving on the bed and let you completely make the bed on him. Then he will lie there under the sheets and blankets all day. Which is disconcerting, because I tend to worry that he won’t be able to breathe. But so far, so good, clearly.

So all chores were suspended for a bit until the coast cleared, but I did get a little song out of it.

Bed, bed, Howard Roark.
Beddest cat in the whole dang house.
Bedder than Chimera is.
Sweeter than Athena, too.

My beautiful wife claims that the third line is not in rhythm, but I insist because Chimera lacks a hard stop, the Chimera is really sounds like three syllables instead of four.

I would claim that I am a poet, but she is, too. And although she has more magazine appearances than I not counting college journals, I have more earnings from poetry so far than she does ($100 for my poem in There Will Be War Volume X puts me ahead of a lot of poets in lifetime earnings) and more full length poetry collections (one) than she does, so I argue from authority.

1 thought on “Wherein Brian J. Owes Jim Croce An Apology Instead Of Royalties”