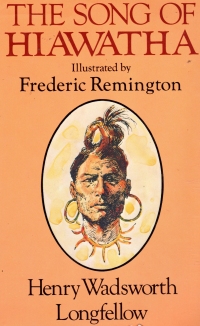 As I mentioned, I recently returned from a trip to Michigan. What are you going to read if you’re going to Michigan? A book set in Michigan which is a series of poems/songs about Native Americans.

The Song of Hiawatha is a collection of native American folk stories told in verse. Wordsworth based some of the work loosely on the studies of explorer Henry Rowe Schoolcraft, who also visited the Ozarks and has a section of the local highway named for him. Which I mention only because it’s interesting how mobile some people, particularly explorers, were in those old days.

The plot, as it were: Hiawatha, a heroic figure if not a demigod, has multiple adventures where he fights fantastic beasts and learns things to share with his tribe. He wins Minnehaha and befriends a couple of fellows. Then the friends and Minnehaha die, and when the white man arrives, Hiawatha leaves his tribe and heads west.

As I mentioned previously, I recently read an excerpt from The Song of Hiawatha in a collection. You know, I’ve been resistent to reading long-form poems, but this book was fairly easy to read. Part of it lies in the poem itself, with its song-like rhythm, its breaks into chapters and even stanzas within the chapters. Part of it lies in the layout of the book, with only 27 lines to a page and lots of white space. When you get a big collection of poems whether by a single author or a collection, you often get lots of lines jammed onto a page in tiny print which makes it harder to read as your eye can skip over lines easier. Or maybe I’m just getting old. But I’d like to point out that my collection of poetry, Coffee House Memories

, is pleasingly arrayed in the paperback edition. The Kindle edition, well, you’re reading on an electronic device anyway, you damn kid.

Strangely enough, tucked into the book was the Reader’s Digest edition booklet discussing the book. Reader’s Digest released a number of classics in a subscription collection, and with each book, they sent a small pamphlet with information about the book and the author. I think I’m going to start collecting and placing these pamphlets along with the teasers for Classics Club editions in a binder so I can show them to houseguests when it’s time for the houseguests to leave. The Reader’s Digest pamphlets are particularly informative. This book had a forward of its own to give that sort of context. Many times, I don’t read the forwards because they tend to be critical essays best read after you’ve read the book, but this forward was informative and context-building.

At any rate, I liked it a bunch, and it’s starting to cement my enjoyment of American poetry, especially that in the vernacular, contrasted with British Romantic poems. See also my book report on Little Orphant Annie and Other Poems by James Whitcomb Riley.