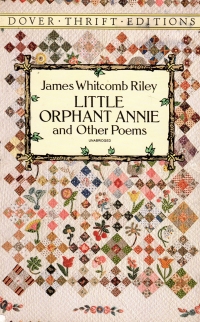 It took me a couple tries to get through this book. A couple years ago, I stuck it in my gym bag as my carry book, and I read it at the martial arts school before class. I even read the first poem, “Little Orphant Annie”, to my children, and they were interested in the Gobble-uns at gits you eff you don’t watch out.

But I ran into an excerpt from “A Child’s Home–Long Ago”. This particular excerpt runs six pages. Which, in retrospect, is not very long, but I’m not generally a fan of long poems (the longest in Coffee House Memories

, “Homecoming ’93: A Collage”, runs five pages, but it’s narrative). The long ones that really choke me are the ones written by the Romantic poets, where it’s ten pages of landscape. Brothers and sisters, I prefer paintings that have people in them, and I sure tooting need something more than a litany of flowers if a poem is going to be more than twelve lines. The excerpt of “A Child’s Home–Long Ago” starts out landscapy, with a description of the home, and I must have abandoned it before it got to describing the children and the other people they interacted with long ago. It got better, and I made it through the poem and the book.

James Whitcomb Riley rose to infamy by penning a counterfeit Poe poem, but he managed to make do on his own as a journalist and writer. His poems make great use of the vernacular, as the refrain of “Little Orphant Annie” proves out, which makes reading the poems a little fun. He’s got a good sense of rhythm and does tell little stores in some of his poems, which makes them more engaging than mere word pictures. I ding the Romantics again because I’ve started reading Keats and Shelley, who wrote only, what, sixty or seventy years before Riley, but whose poems read much older. Or perhaps Riley’s just read that younger.

Riley, relative unknown in the 21st century, must have punched quite above his weight in the pop culture of the day, though. The title poem of this collection spawned comics in the papers and a musical play made into a movie several times. Raggedy Ann dolls, which were popular up into my childhood, were named for the poems “Little Orphant Annie” and “Raggedy Man”. Crazy. You don’t get many toys or comics named after Maya Angelou or David Clewell poems these days, ainna?

So I enjoyed the book and wouldn’t mind getting my hands on a more comprehensive volume sometime. This book is a little Dover Thrift Edition, which was what we had instead of inexpensive POD and Kindle versions of classic works back in the old days. For a buck, you could get a collection of classic poems or a longer work that had fallen out of copyright. They’re still available, apparently, for just a couple bucks. Dover in the 1990s must have been the Walter J. Black of its time, with its minting money in classics and in clip art books. Like book clubs of classics, though, its main time of success must have been limited.