For Christmas, my beautiful wife gave me a gift card for $60 to an actual record store downtown, and after taking down the Christmas decorations and cleaning the house, I headed out in the snow to go.

I haven’t been in an actual dedicated record store in…. well, probably since the 1980s, when the music stores were predominantly record stores. This shop, Stick It In Your Ear, has mostly used records but also some new titles–which, as you might know, run $25 or more. So I was prepared to run through the gift card quickly.

Also, browsing Vintage Stock, the antique malls, or the book sales pretty much means flipping through uncategorized, jumbled collections of records and being sometimes pleased with what you find. An organized record shop means I would have to think of an artist first and then look to see if the store had the artist and what by the artist.

I got over my trepidation and went in. And found more than I expected at the worst. 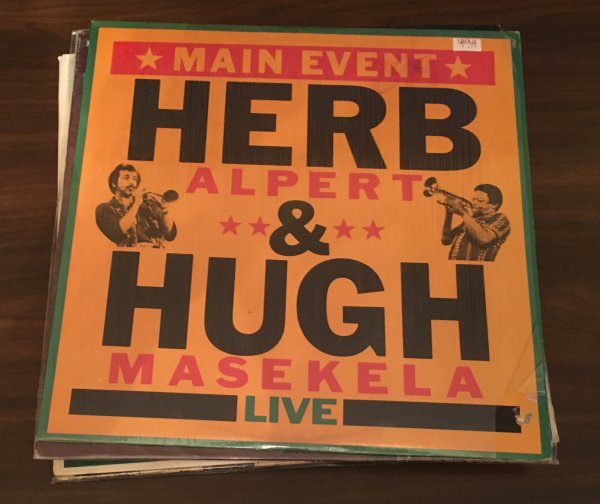 I saw the Chuck Mangione section pretty clearly, but I had trouble finding the Herb Alpert section. I mean, what was he? Jazz? No. 80s/90s? No. Pop? No. He was in the 50s and 60s section along with the bubblegum pop from that era. I had all of the records except the live album Main Event that he did with Hugh Maskela. I had heard a song from this record on WSIE and went looking for it, but it was pretty expensive on Amazon at the time. But I got it for $8.

I did the calculations, and I had a couple albums’ worth of money left, so I got two by trumpeter Maynard Ferguson: Body & Soul and Trumpet Rhapsody.

The records ranged between $4 and $10, which is to say about what they run at the antique malls. So maybe I’ll drop in at the record shop more often. Or maybe I just like hunting for $1 or $3 steals more than buying records on their own.

But the Chuck Mangione records led to a slightly comedic exchange through mandatory speech mufflers.

The record store guy, flipping through and calculating the total: “Ah, Chuck,” as though he was familiar with the oeuvre.
“No Feels So Good,” I said.
“So you came out and bought some records,” he said.
After a beat, I replied, “You don’t have Feels So Good by Chuck Mangione.”
“If we did, it would be in the Chuck Mangione section.”
But I wasn’t asking it as a question.

I have listened to some of them, but I forget which ones.

I guess I will have to listen to them all over again.

And probably hold off on the record buying until I build another set of record shelving.