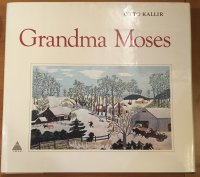 I said when I reviewed Georgia O’Keefe earlier this year:

I think I confused her with Grandma Moses when I was young, as she was still alive but was very, very old–both she and Grandma Moses lived to about the century mark (Grandma Moses a little older, Georgia O’Keeffe a little younger). And both of their names started with G, which means to a young man not steeped in the arts, they were practically the same person.

Well, I have now completed my education into the differences between Grandma Moses and Georgia O’Keeffe (with a little Frida Kahlo thrown in this year for a bit of spice). Grandma Moses was what they call a “primitive” artist, meaning in the art world that she was not trained in the arts. I tend to use the term incorrectly, meaning that she’s kind of folk art, with some good representation of nature in a distant landscape but with diminishing skill on buildings and then on people and animals. I mean, much of her work is about what you would expect from a paint-with-wine class, maybe. Not quite up to Bob Ross on the landscapes, even.

I think she became famous because she was a novelty: She started painting at about 80, and a New Yorker visiting upstate spotted her work and worked to make her famous (and that he was an early collector and made money on her is purely coincidental). Soon, she was having exhibitions around the world and appeared in a documentary film and an appearance on Murrow’s See It Now television program.

This book is not just a monograph, but rather a comprehensive treatment of Moses and her work. It includes a biography, information about her career, several letters in her own hand reproduced, and a complete catalog of her known works (at the time of publication–it’s possible they have found and/or authenticated more in the almost fifty years since this book’s publication). It’s a bonzer–356 pages, although it’s not small print and has extensive indexes and a complete listing of her work with small photos where available). Very complete.

One gets the sense that Grandma Moses herself did not take the whole thing too seriously and did not let her fame go to her head. Of course, as a child of the 1860s and a resident of Virginia in the reconstruction era (perhaps considered a carpetbagger by the Virginians) she would have more perspective than a young artist who was 20 something at the time of “discovery.”

So although I appreciate her work a little more than Kahlo or O’Keeffe, I would still not decorate my house with Grandma Moses prints.