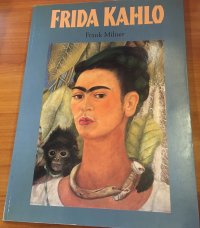 You know, I wanted to really dislike Frida Kahlo’s work because she’s so celebrated by modern tastemakers because she was a foreign Communist bisexual back in the day. Because that’s what titillates a lot of people who want to be seen as right-thinking more than their response to the art itself, their response to the artist as celebrity. Which Frido Kahlo was and might well still be. I mean, I’ve seen ads for merchandise with her on them even in this twenty-first century.

So I really wanted to dislike her work, and, well, it’s still not my favorite–she’s of the surrealist and brutalist stripe from the early 20th century like Matisse and Madigliani and Picasso, and some of her works are pretty gory. But some of the portraits and the still lifes are not bad.

But that’s not what she’s known for, unfortunately.

So I didn’t hate her work, but it’s probably not for the Nogglestead decor.