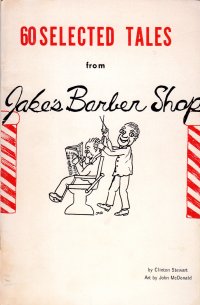 This book is of unknown provenance; it has no title page or copyright page, and the Internet has never heard of it. I’m guessing that it was written in the early to middle 1970s because it refers to Spiro Agnew and Richard Nixon. It has the feel of small town paper’s humor column (or maybe something from the Springfield papers at the time, but it’s before the Internet), and a later entry does start out “This week” which lends credence to the belief.

And it’s quite an enjoyable little book. The “author” is purportedly a barber in a small town who tells stories about the local residents, mostly made up characters so I guess this is more an example of a collection of flash fiction than the actual reporting on what is going on in a real small town, but it’s amusing and sometimes humorous. I actually laughed out loud at a couple of the bits, including a man who corrected a nagging wife by slapping her bottom with a carp (it must be the Ozarks, as no self-respecting northerner who catches a carp brings it home to eat–because even when we’re poor, we’re not barbarians).

Given the size of the book, I probably bought it in a packet of chapbooks for a buck at the Friends of the Springfield-Greene County Library book sale at some point. I will keep my eyes open for other volumes by the author, but I’m not sanguine–this looks like a self-published low run number (although it’s signed and inscribed to Theodore), so it’s probably a one-off for a larf.